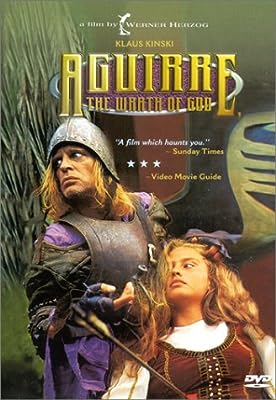 Klaus Kinski, Ruy Guerra. Werner Herzog directed this surreal tale of a mad, power-hungry 16th-century conquistador who leads a doomed expedition through Spain in search of a lost city of gold. 1973/color/94 min/NR/German/subtitled.

Quite simply a great movie, one whose implacable portrait of ruthless greed and insane ambition becomes more pertinent every year. The astonishing Klaus Kinski plays Don Lope de Aguirre, a brutal conquistador who leads his soldiers into the Amazon jungle in an obsessive quest for gold. The story is of the expedition's relentless degeneration into brutality and despair, but the movie is much more than its plot. Director Werner Herzog strove, whenever possible, to replicate the historical circumstances of the conquistadors, and the sheer human effort of traveling through the dense mountains and valleys of Brazil in armor creates a palpable sense of struggle and derangement. This sense of reality, combined with Kinski's intensely furious performance, makes Aguirre, the Wrath of God a riveting film. Its unique emotional power is matched only by other Herzog-Kinski collaborations like Fitzcarraldo and Woyzek. --Bret Fetzer