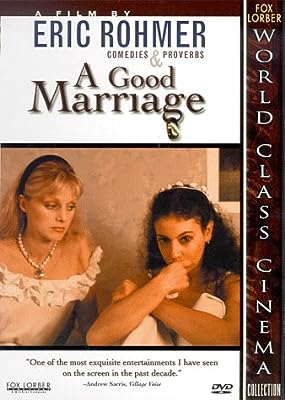 Price: $7.58
As of 2023-01-31 20:28:47 UTC (more info)
Product prices and availability are accurate as of 2023-01-31 20:28:47 UTC and are subject to change. Any price and availability information displayed on http://www.amazon.com/ at the time of purchase will apply to the purchase of this product.
Availability: Not Available - stock arriving soon
Buy Now from Amazon
Product Information (more info)
CERTAIN CONTENT THAT APPEARS ON THIS SITE COMES FROM AMAZON SERVICES LLC. THIS CONTENT IS PROVIDED 'AS IS' AND IS SUBJECT TO CHANGE OR REMOVAL AT ANY TIME.

The second of Eric Rohmer's "Comedies and Proverbs" series, A Good Marriage stars Béatrice Romand as Sabine, a headstrong, emotional Roller coaster of a searching single woman. She impulsively leaves her married lover one night and decides she's going to marry, setting out to find her man with a mixture of romantic idealism and calculated determination. When her best friend Clarisse (Arielle Dombasle, from Pauline at the Beach) introduces Sabine to her handsome cousin Edmond (André Dussollier, Perceval), she seems to have found her mate; it's just a matter of convincing him of the impending marriage. But, alas, all is not so simple in Rohmer's world of modern love. Romand's Sabine is a delightful conundrum: resolute, firm, and fiercely independent on the one hand; moody, impulsive, and emotionally fragile on the other. Like all of Rohmer's films, this is driven by conversation, from uncomfortable small talk to confessions between girlfriends, but Sabine also lives her life, passionately pursuing her goals with the single-minded zest of a woman on a mission. Her road to love may take a few unplanned detours, but Rohmer, the eternal romantic, concludes the film on a delightfully hopeful note packed in a few glances and a flirty smile. --Sean Axmaker