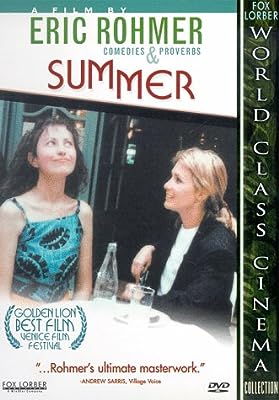 Price: $19.98
As of 2022-08-19 10:36:53 UTC (more info)
Product prices and availability are accurate as of 2022-08-19 10:36:53 UTC and are subject to change. Any price and availability information displayed on http://www.amazon.com/ at the time of purchase will apply to the purchase of this product.
Availability: Not Available - stock arriving soon
Buy Now from Amazon
Product Information (more info)
CERTAIN CONTENT THAT APPEARS ON THIS SITE COMES FROM AMAZON SERVICES LLC. THIS CONTENT IS PROVIDED 'AS IS' AND IS SUBJECT TO CHANGE OR REMOVAL AT ANY TIME.

Gloomy young Parisian Delphine (Marie Rivière) faces her summer alone when her best friend cancels their travel plans to stay with her new boyfriend. Determined to have her vacation, she tries a number of alternatives but feels left out at a family retreat, runs into a former lover at a ski resort, and becomes completely cowed by her unlikely companion on the French shore, an uninhibited Swedish vacationer who sunbathes nude and picks up men for one night stands---a far cry from the insecure Delphine. Willowy Rivière plays Delphine with a combination of romantic idealism, headstrong determination, and uncompromising (often debilitating) demands, an impossible standard that leaves her lonely and wanting until she meets a handsome young man at the train station on her way back to Paris. The two become charmed by one another and, giddy with anticipation, Delphine insists they watch the setting sun to see the legendary green ray (the French title of the film is "Le Rayon Vert") in an ephemeral conclusion both magical and tenderly human. Rohmer changed his shooting style completely for the fifth film in his "Comedies and Proverbs" series, creating the characters in collaboration with the actors and shooting with only a script outline to create a largely improvised portrait of Delphine, but the easy rhythms, the gentle naturalism, and Rohmer's genuine affection for his characters, foibles and all, continue in his tradition of smart, sensitive, and delightfully witty romantic comedies. --Sean Axmaker