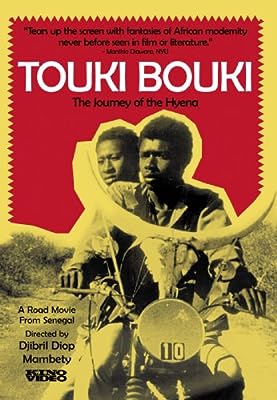 Price: $29.98
As of 2022-10-04 05:08:15 UTC (more info)
Product prices and availability are accurate as of 2022-10-04 05:08:15 UTC and are subject to change. Any price and availability information displayed on http://www.amazon.com/ at the time of purchase will apply to the purchase of this product.
Availability: Not Available - stock arriving soon
Buy Now from Amazon
Product Information (more info)
CERTAIN CONTENT THAT APPEARS ON THIS SITE COMES FROM AMAZON SERVICES LLC. THIS CONTENT IS PROVIDED 'AS IS' AND IS SUBJECT TO CHANGE OR REMOVAL AT ANY TIME.

Senegalese director Djibril Diop Mambety's story of two young lovers who long to escape to Paris is a legend in African cinema. Like their New Wave counterparts in France, young Mory and his girlfriend Anta are alienated form their own society and imagine freedom far from the dusty streets of their hometown Dakar. Living at the edge of the heaving, crystal-blue ocean, their dream city doesn't seem so far away, and the lovers embark on an exhilarating picaresque adventure as they try to hustle the money for their passage. They try gambling but lose; they steal the receipts of a charity wrestling match, but take the wrong strongbox. Finally, they manage to rob a rich, predatory man and escape in his roadster. Flushed with victory, Mory imagines himself riding triumphantly into Dakar like a Wolof prince, and suddenly Paris and all its mysteries are within their reach. A rueful parable about fear and freedom, Touki Bouki has the restless energy of modernity and all the power of traditional African symbolism. Mory's motorbike is accessorized with a pair of cattle horns mounted on the handlebars, and Josephine Baker's sweet voice leads them on through their journey. But the rift between these two worlds is all too real. Though both Mory and Anta board the ocean liner that will take them to their destination, only one of them will stay on to face the truth of realizing a dream.