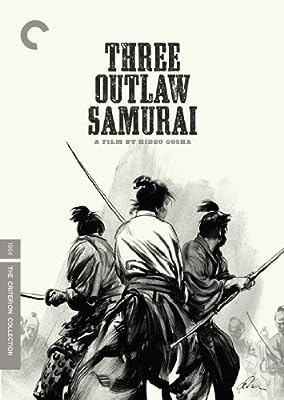 Price: $13.99
As of 2023-02-04 17:46:13 UTC (more info)
Product prices and availability are accurate as of 2023-02-04 17:46:13 UTC and are subject to change. Any price and availability information displayed on http://www.amazon.com/ at the time of purchase will apply to the purchase of this product.
Availability: Not Available - stock arriving soon
Buy Now from Amazon
Product Information (more info)
CERTAIN CONTENT THAT APPEARS ON THIS SITE COMES FROM AMAZON SERVICES LLC. THIS CONTENT IS PROVIDED 'AS IS' AND IS SUBJECT TO CHANGE OR REMOVAL AT ANY TIME.

This first film by the legendary Hideo Gosha (Sword of the Beast) is among the most canonized chambara (sword-fighting) films. An origin-story offshoot of a Japanese television series phenomenon of the same name, Three Outlaw Samurai is a classic in its own right. In it, a wandering, seen-it-all ronin (Tetsuro Tamba) becomes entangled in the dangerous business of two other samurai (Isamu Nagato and Mikijiro Hira), hired to execute a band of peasants who have kidnapped the daughter of a corrupt magistrate. With remarkable storytelling economy and thrilling action scenes, this is an expertly mounted tale of revenge and loyalty.

Tunes of Glory (The Criterion Collection...