Taste of Cherry (The Criterion Collection) 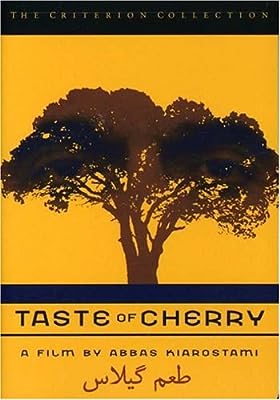 Price: $29.95
As of 2022-11-30 01:07:32 UTC (more info)
Product prices and availability are accurate as of 2022-11-30 01:07:32 UTC and are subject to change. Any price and availability information displayed on http://www.amazon.com/ at the time of purchase will apply to the purchase of this product.
Availability: Not Available - stock arriving soon
Buy Now from Amazon
Product Information (more info)
CERTAIN CONTENT THAT APPEARS ON THIS SITE COMES FROM AMAZON SERVICES LLC. THIS CONTENT IS PROVIDED 'AS IS' AND IS SUBJECT TO CHANGE OR REMOVAL AT ANY TIME.

After reaching middle age, Mr.Badii is ready to call it quits and sets out to find an "assistant" with a shovel who will help him commit suicide. After a variety of refusals, he finally meets an old Turkish taxidermist who agrees to help him.

Iranian director Abbas Kiarostami won the Palme d'Or at the 1997 Cannes Film Festival for this contemplative film about a Muslim, Mr. Badi (Homayon Ershadi), who drives around the barren hills outside Tehran, flagging down passersby and offering good money for a simple job that he's hesitant to explain. He's planning his suicide and seeks someone to perform something of a symbolic eulogy. Most of his subjects refuse (personal morality aside, suicide is forbidden to Muslims), but he finds an elderly taxidermist (Abdolrahman Bagheri) who agrees only because he needs the money for an ill child. Yet the old man gently pleads with him to choose life, to embrace the joys of earthly existence, to remember the taste of cherries. Though initially greeted with critical acclaim, A Taste of Cherry received poor distribution in the U.S. The meandering, deliberately paced drama is composed of long conversations and long silences, and the camera is locked in the car for entire sequences, staring at the protagonists in still closeups with the dusty landscape rolling past the windows of the Land Rover in the background. Kiarostami's film is not for everyone, but if you can embrace the quiet power and grace of his deceptively simple style, the film becomes a remarkably rich celebration of human dignity and resilience. By the astonishing conclusion we can see past Badi's age-etched face to the soul peering out from behind his sad eyes. --Sean Axmaker

To Be or Not to Be (Criterion Collection...