This Sporting Life (The Criterion Collection) 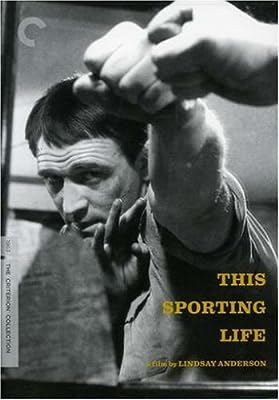 Price: $39.95
As of 2023-02-04 23:35:18 UTC (more info)
Product prices and availability are accurate as of 2023-02-04 23:35:18 UTC and are subject to change. Any price and availability information displayed on http://www.amazon.com/ at the time of purchase will apply to the purchase of this product.
Availability: Not Available - stock arriving soon
Buy Now from Amazon
Product Information (more info)
CERTAIN CONTENT THAT APPEARS ON THIS SITE COMES FROM AMAZON SERVICES LLC. THIS CONTENT IS PROVIDED 'AS IS' AND IS SUBJECT TO CHANGE OR REMOVAL AT ANY TIME.

One of the finest British films ever made, this benchmark of kitchen-sink realism follows the self-defeating professional and romantic pursuits of a miner turned rugby player eking out an existence in drab Yorkshire. With an astonishing, raging performance by a young Richard Harris, an equally blistering turn by fellow Oscar nominee Rachel Roberts as the widow with whom he lodges, and electrifying direction by Lindsay Anderson, in his feature-film debut following years of documentary work, This Sporting Life remains a dramatic powerhouse.

Wakefield Express (1952), Anderson s short-film contribution to England s Free Cinema series, shot in the same town that served as the location for This Sporting Life

PLUS: A booklet featuring a new essay by film scholar Neil Sinyard and writings by Anderson, including his groundbreaking article, Stand Up! Stand Up!