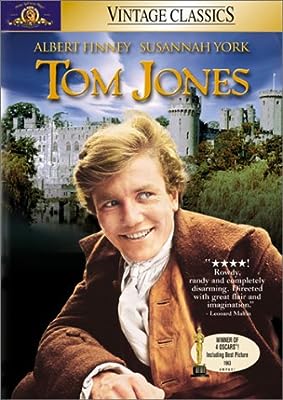 Price: $14.94
As of 2022-12-09 18:15:37 UTC (more info)
Product prices and availability are accurate as of 2022-12-09 18:15:37 UTC and are subject to change. Any price and availability information displayed on http://www.amazon.com/ at the time of purchase will apply to the purchase of this product.
Availability: Not Available - stock arriving soon
Buy Now from Amazon
Product Information (more info)
CERTAIN CONTENT THAT APPEARS ON THIS SITE COMES FROM AMAZON SERVICES LLC. THIS CONTENT IS PROVIDED 'AS IS' AND IS SUBJECT TO CHANGE OR REMOVAL AT ANY TIME.

Director Tony Richardson and scripter John Osborne's sprawling, bawdy romp through 18th-century England earned four Academy Awards, including Best Picture. Albert Finney stars as the titular hero, a charming country boy whose beguiling manner gets him into one hilarious romantic misadventure after another; based on the novel by Henry Fielding. With Susannah York, Hugh Griffith, David Warner, and Edith Evans.