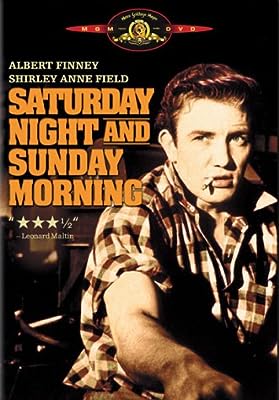 Price: $14.98
As of 2022-08-18 15:48:09 UTC (more info)
Product prices and availability are accurate as of 2022-08-18 15:48:09 UTC and are subject to change. Any price and availability information displayed on http://www.amazon.com/ at the time of purchase will apply to the purchase of this product.
Availability: Not Available - stock arriving soon
Buy Now from Amazon
Product Information (more info)
CERTAIN CONTENT THAT APPEARS ON THIS SITE COMES FROM AMAZON SERVICES LLC. THIS CONTENT IS PROVIDED 'AS IS' AND IS SUBJECT TO CHANGE OR REMOVAL AT ANY TIME.

In his first starring role, Albert Finney gained international acclaim for his impressive (TheNew Yorker) portrayal of Arthur Seaton, a rebellious factory worker who lives only for his wild, carefree nights at the pub. A remarkable and influential drama that captures the despair of working class life, Saturday Night and Sunday Morning is 'superbly enacted [and] one of the best ofBritain's 'angry young men dramas of the 60s. (Leonard Maltin). The sights and sounds of industrial Nottingham resonate with a grimy thud as Arthur Seaton works his tedious factory job. Through ale, women and practical jokes, he vents his frustrations against the establishments of work and marriage until his reckless ways lead him to a night that changes his life. Forced to reevaluate his convictions, Arthur must decide exactly what he stands for