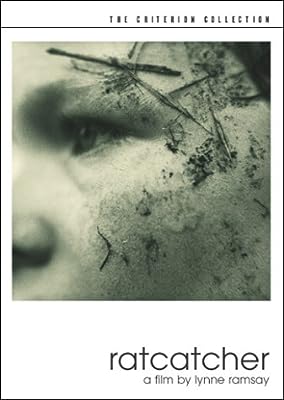 Price: $18.01
As of 2022-10-02 09:14:18 UTC (more info)
Product prices and availability are accurate as of 2022-10-02 09:14:18 UTC and are subject to change. Any price and availability information displayed on http://www.amazon.com/ at the time of purchase will apply to the purchase of this product.
Availability: Not Available - stock arriving soon
Buy Now from Amazon
Product Information (more info)
CERTAIN CONTENT THAT APPEARS ON THIS SITE COMES FROM AMAZON SERVICES LLC. THIS CONTENT IS PROVIDED 'AS IS' AND IS SUBJECT TO CHANGE OR REMOVAL AT ANY TIME.

In her breathtaking and assured debut feature, Lynne Ramsay creates a haunting evocation of a troubled Glasgow childhood. Set during Scotland’s national garbage strike of the mid-1970s, Ratcatcher explores the experiences of a poor adolescent boy as he struggles to reconcile his dreams and his guilt with the abjection that surrounds him. Utilizing beautiful, elusive imagery, candid performances, and unexpected humor, Ratcatcher deftly examines the landscape of urban decay and a rich interior landscape of hope and perseverance, resulting in a work at once raw and deeply poetic.

Brutality and hope intertwine in this quiet coming-of-age story. Set in a Glasgow, Scotland, slum during a 1973 trash collectors' strike, the film follows young James, shaken after accidentally causing the death of a friend, who dreams of moving into newly built council flats. The loosely plotted slice-of-life piece moves between James's family and his friendship with Kenny, a slightly off animal fancier, and the older Margaret Anne. Though the setting is grim, the movie is far from bleak. Even as the trash bags pile up, James takes comfort in something as simple as being combed for head lice. The cast is excellent, and writer-director Lynne Ramsay coaxes astonishingly good performances out of her child actors. Complex and haunting, Ratcatcher holds a silent wish at its center. The DVD includes an interview with Ramsay, and three of her short films. --Ali Davis