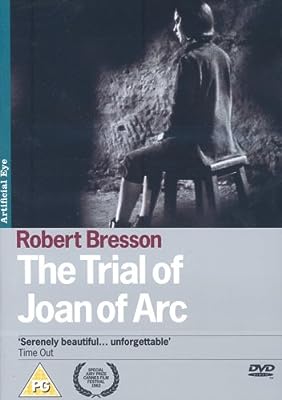 Price: $3.00
As of 2022-11-30 01:51:15 UTC (more info)
Product prices and availability are accurate as of 2022-11-30 01:51:15 UTC and are subject to change. Any price and availability information displayed on http://www.amazon.com/ at the time of purchase will apply to the purchase of this product.
Availability: Not Available - stock arriving soon
Buy Now from Amazon
Product Information (more info)
CERTAIN CONTENT THAT APPEARS ON THIS SITE COMES FROM AMAZON SERVICES LLC. THIS CONTENT IS PROVIDED 'AS IS' AND IS SUBJECT TO CHANGE OR REMOVAL AT ANY TIME.

United Kingdom released, PAL/Region 2 DVD: it WILL NOT play on standard US DVD player. You need multi-region PAL/NTSC DVD player to view it in USA/Canada: LANGUAGES: French ( Dolby Digital 2.0 ), English ( Subtitles ), WIDESCREEN, SPECIAL FEATURES: Black & White, Cast/Crew Interview(s), Interactive Menu, Scene Access, Trailer(s), SYNOPSIS: Characteristically breaking with tradition, director Robert Bresson presents a realistic, unique view of the life and death of Joan of Arc. Using a script based on the actual transcript notes taken during her trial, Bresson focuses on the psychological and physical torture that Joan had to endure, showing how these techniques were used to break her resolve and cause her to eventually recant her faith. With impeccable historical accuracy Bresson re-creates the story of the peasant girl who, after leading an unsuccessful revolt against the government, was brought to trial, convicted of heresy, and burned as a witch. However, Bresson shows Joan (Florence Carrez) as a woman more sophisticated and calculating and less naive than she has normally been represented. His Joan, while more real, is no less heroic than the traditional Joan. This unusual approach is characteristic of this unique director who defies classification as either a traditional or "new wave" filmmaker while being highly respected for pursuing his own individual style and vision. Robert Bresson has been called a poet and philosopher with a camera, preoccupied with the idea of predestination and spiritual grace. In Proces de Jeanne d'Arc, as with all of his films, Bresson imprints his own personal signature. The film is tightly constructed and stripped to the bare essence of the material. Bresson has made only a handful of feature films, yet he is one of the most discussed and revered figures in cinema, creative, original and u...The Trial of Joan of Arc (UK) ( Procès de Jeanne d'Arc )