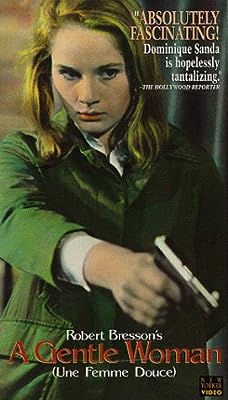 Price:
As of 2022-11-27 15:37:21 UTC (more info)
Product prices and availability are accurate as of 2022-11-27 15:37:21 UTC and are subject to change. Any price and availability information displayed on http://www.amazon.com/ at the time of purchase will apply to the purchase of this product.
Availability: Not Available - stock arriving soon
Buy Now from Amazon
Product Information (more info)
CERTAIN CONTENT THAT APPEARS ON THIS SITE COMES FROM AMAZON SERVICES LLC. THIS CONTENT IS PROVIDED 'AS IS' AND IS SUBJECT TO CHANGE OR REMOVAL AT ANY TIME.

A curtain blows near an open window. A limp, crooked arm lays on the street, followed by motionless hands and the back of a head. Finally we see the dead body of a young woman (Dominique Sanda) and the crowd of feet that have gathered around, the scene of a suicide. Her story is related in flashback by her husband (Guy Frangin), a guilt-ridden pawnbroker who paces around her body lying in state. A couple like any other, they attend movies and theater, argue, make up, and make love. But director Robert Bresson shows us only the girl's sadness and systematic smothering under her husband's greed, jealousy, and increasing control. Even when the soundtrack erupts in peals of joy and laughter, such moments are left offscreen. It's Bresson's first color film and he mutes the colors to such a dull flatness that the interiors are like a dark, suffocating prison. Only in the sun do the screen and the girl spark to life. It's as rigorous as any of Bresson's works--the characters, tellingly, are not given names and there's a marvelous tension between the claustrophobic home life and the busy world of city streets and art galleries outside--but the picture lacks the understated beauty of his previous films until the climax. Bresson plays her suicide as a lovely, delicate gesture of freedom, a powerful, painful, achingly beautiful moment of resignation and transcendence all in one graceful gesture. --Sean Axmaker