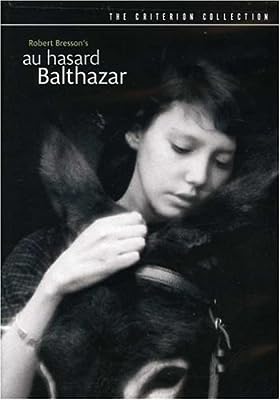 Price: $29.95
As of 2023-02-06 15:59:31 UTC (more info)
Product prices and availability are accurate as of 2023-02-06 15:59:31 UTC and are subject to change. Any price and availability information displayed on http://www.amazon.com/ at the time of purchase will apply to the purchase of this product.
Availability: Not Available - stock arriving soon
Buy Now from Amazon
Product Information (more info)
CERTAIN CONTENT THAT APPEARS ON THIS SITE COMES FROM AMAZON SERVICES LLC. THIS CONTENT IS PROVIDED 'AS IS' AND IS SUBJECT TO CHANGE OR REMOVAL AT ANY TIME.

Au Hasard Balthazar is one of the most excruciating spiritual experiences I have ever witnessed on the screen and it is directed by the only person that could pull off such a remarkable achievement; the great French director Robert Bresson. The story follows two different lives, one a young farmers daughter, another a donkey named Balthazar. Au Hasard Balthazar is a tragic film full of pain, anguish and human suffering, a story that is Bresson's heartbreaking prayer to the world. You see the beginning of adolescence for Balthazar as he begins to take his first steps which will soon enough lead him to the painful branding of his hooves, which is the initiation of a life that will involve slavery and burden.

A profound masterpiece from one of the most revered filmmakers in the history of cinema, director Robert Bresson's Au hasard Balthazar follows a much-abused donkey, Balthazar, whose life strangely parallels that of his owner, Marie. A beast of burden suffering the sins of man, Balthazar nevertheless nobly accepts his fate. Through Bresson's unconventional approach to composition, sound, and narrative, this seemingly simple story becomes a moving religious parable of purity and transcendence.

Au hazard Balthazar can have a profoundly moving effect on those who are sensitive to its power. Like any film by Robert Bresson, it provokes widely different responses: Many critics have hailed it as a masterpiece, while others (as Pauline Kael observed) "may find it painstakingly tedious and offensively holy." It all depends on what the viewer brings to Bresson's seemingly simple tale of a donkey named Balthazar, who experiences kindness and cruelty as he is passed from owner to owner. Populated by a variety of sinners and saints alike, the film can be seen as a simple animal fable, as Balthazar suffers nobly at the hands of his handlers. Dig deeper into Bresson's art, however, and you're likely to find a very Catholic story with strong parallels to the life of Christ and his unbearable burden of the sins of mankind.

No matter how you approach the film, only the most cold-hearted viewer will be immune to Balthazar's fate. And if you're not sure what to make of it all, this superb Criterion DVD offers two essential bonus features to guide you toward a greater understanding of Bresson's approach to cinema: Film scholar and devoted "Bressonian" Donald Richie offers his astute observations in a 2004 video interview, and in an in-depth French TV appearance from 1966, Bresson talks at length about Au hazard Balthazar along with fellow directors Louis Malle and Jean-Luc Godard, and members of the film's cast and crew. This is a remarkable document from a bygone era, when "art film" was at its peak, and directors (especially French ones) were eager to discuss the intellectual significance of their work. Kudos to Criterion for including this archival gem of film appreciation. --Jeff Shannon

Au Hasard Balthazar is mostly seen through the donkeys eyes where it shows him as a simple dumb animal, noble in his acceptance of a cruel world in which he has no control. Over the course of the film Balthazar will be passed from cruel master to cruel master, traversing the stations of the cross, and be beaten, whipped, slapped, burned, mocked and in the concluding crucifixion end, shot and abandoned to die alone on a hillside like a modern-day Golgotha. While we witness Balthazar's suffering, we will watch the farmers daughter Marie being passed from man to man and whose tragic fate sadly parallels his. Legendary director Jean-Luc Godard perfectly sums up Au Hasard Balthazar by stating: "Everyone who sees this film will be absolutely astonished...because this film is really the world in an hour and a half."