Diary of a Country Priest (The Criterion Collection) 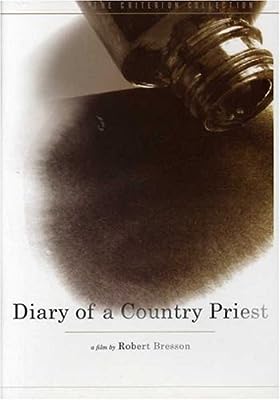 Robert Bresson's tragic masterpiece The Diary of a Country Priest tells the story of a young priest who becomes a failure. The young man's face looks withdrawn and solemn throughout the story as he becomes strained trying to carry out the responsible duties of a priest at his new local parish; doing his best in making a positive influence within his community. He truly believes God has sent him to the small town of Ambricort to help his local population during the cold and bleak winter, but when arriving his flock mock him, spread cruel gossip about him being a drunkard and eventually drive him to the bitter point of defeat.

A young priest arrives in the French country village of Ambricourt to attend to his first parish, but the apathetic and hostile rural congregation rejects him immediately. Through his diary entries, the suffering young man relays a crisis of faith that threatens to drive him away from the village and from God. The fourth film by Robert Bresson (Les Dames du Bois de Boulogne) finds the director beginning to implement his stylistic philosophy as a filmmaker, stripping away all inessential elements from his compositions, the dialogue and the music, and exacting a purity of image and sound. The DVD also features an audio commentary by film historian Peter Cowie, deleted scenes and the trailer.

Diary of a Country Priest is the first masterpiece by the great Robert Bresson, a towering and slow-working figure in French cinema. Starkly adapted from a successful novel by Georges Bernanos, the film locks in to the mind of a sickly, ineffective young priest trapped in an unfriendly rural area. Bresson charts the priest's collapse with a series of brief scenes, a minimalist style that makes the slightest touch of a hand or far-off sound of a dog barking seem magnified in importance. (This is a movie that must be watched and listened to--it is not a casual experience.) Bresson's luminous portrait of faith and worldly humiliations takes on the intensity of a saint's notebook. In the central role is Claude Laydu, one of Bresson's early experiments with non-actors; his sad, open face is often in close-up, lighting our way into a world of private salvation. --Robert Horton

Along with The Passion of Joan of Arc, Diary of a Country Priest has been called by many as one of the greatest Catholic films ever made. Both of these films center on tragic characters who are strong believers in faith and who inhabit a cruel sinful society that tries their best to set out and destroy them. Robert Bresson is considered one of the great masters in the art form of the cinema and most of his films center around the harsh themes of pain, redemption, sin, death, and human cruelty. In his book, Sculpting in Time, legendary director Andrei Tarkovsky describes Bresson as "perhaps the only artist in cinema, who achieved the perfect fusion of the finished work with a concept theoretically formulated beforehand." The priest of Ambricort starts out as a young and ambitious man who truly believes in what he is doing, but within time and with the slow failing of his health he not only comes to lose his ambition as a priest, but he loses his faith in God as well.