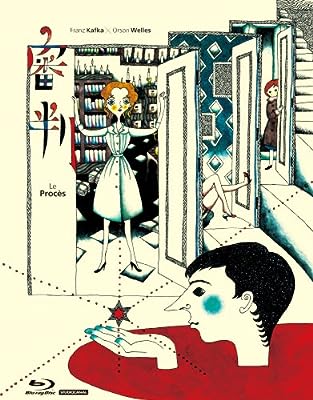 Price:
As of 2022-10-07 16:18:17 UTC (more info)
Product prices and availability are accurate as of 2022-10-07 16:18:17 UTC and are subject to change. Any price and availability information displayed on http://www.amazon.com/ at the time of purchase will apply to the purchase of this product.
Availability: Not Available - stock arriving soon
Buy Now from Amazon
Product Information (more info)
CERTAIN CONTENT THAT APPEARS ON THIS SITE COMES FROM AMAZON SERVICES LLC. THIS CONTENT IS PROVIDED 'AS IS' AND IS SUBJECT TO CHANGE OR REMOVAL AT ANY TIME.

IMPORT FROM JAPAN *** BLU-RAY EDITION *** REGION A *** Josef wakes up in the morning and to his surprise finds the police in his room. They tell him that he will be on trial but nobody tells him what he is accused of. In order to find out the reason of why he is being accused and to protest his innocence, he tries to look behind the facade of the judicial system. But since this remains a failure, there seems to be no chance for him to escape from this horrific nightmare.