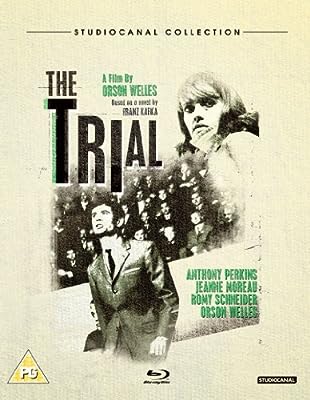 Price:
As of 2022-11-29 12:08:56 UTC (more info)
Product prices and availability are accurate as of 2022-11-29 12:08:56 UTC and are subject to change. Any price and availability information displayed on http://www.amazon.com/ at the time of purchase will apply to the purchase of this product.
Availability: Not Available - stock arriving soon
Buy Now from Amazon
Product Information (more info)
CERTAIN CONTENT THAT APPEARS ON THIS SITE COMES FROM AMAZON SERVICES LLC. THIS CONTENT IS PROVIDED 'AS IS' AND IS SUBJECT TO CHANGE OR REMOVAL AT ANY TIME.

United Kingdom released, Blu-Ray/Region B : it WILL NOT play on regular DVD player, or on standard US Blu-Ray player. You need multi-region Blu-Ray player to view it in USA/Canada: LANGUAGES: English ( Dolby Digital 2.0 ), English ( DTS-HD Master Audio ), English ( Subtitles ), SPECIAL FEATURES: Booklet, Cast/Crew Interview(s), Deleted Scenes, Documentary, Interactive Menu, Scene Access, Trailer(s), SYNOPSIS: Based on the influential Franz Kafka novel, The Trial is a paranoid masterpiece directed by Orson Welles (Citizen Kane, Touch of Evil). Josef K (Anthony Perkins - Psycho) is arrested, but has no idea what crime he is accused of. In order to find out what offence he is meant to have committed, and to protest his innocence, Josef K must go through the machinations of the judicial system, but he soon finds himself trapped in a dehumanised nightmare. Welles' claimed that The Trial was the best film he ever made. Rich with Welles' trademark style, The Trial is a visual feast. The icy black and white photography strikingly depicts the spider-and-fly games of an ineffectual man struggling against his inescapable fate. Using the cracked labyrinthine corridors of Paris' ruined Gare D'Orsay as his set, Welles perfectly captures Kafka's terrifying skewed world. A masterclass in building tension, The Trial aptly illustrates why Welles is often cited as the greatest director of all time. ...The Trial (1962) ( Le procès ) ( Der Prozess (Il processo) )