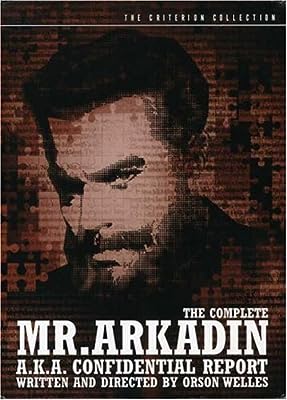 Price: $49.95
As of 2022-10-04 14:16:13 UTC (more info)
Product prices and availability are accurate as of 2022-10-04 14:16:13 UTC and are subject to change. Any price and availability information displayed on http://www.amazon.com/ at the time of purchase will apply to the purchase of this product.
Availability: Not Available - stock arriving soon
Buy Now from Amazon
Product Information (more info)
CERTAIN CONTENT THAT APPEARS ON THIS SITE COMES FROM AMAZON SERVICES LLC. THIS CONTENT IS PROVIDED 'AS IS' AND IS SUBJECT TO CHANGE OR REMOVAL AT ANY TIME.

A shady financier pays a man to research his past, in order to erase it with murder.

Will the "real" Mr. Arkadin please stand up? Probably not. However, thanks to the folks at the Criterion Collection, we may now have a version of Mr. Arkadin that is as close as it's going to get to Orson Welles's original vision. Part Citizen Kane, part The Third Man, Mr. Arkadin is another Wellesian Post-War Noir tale about the unraveling of the defining secret of a powerful and wealthy tycoon. Welles plays the ruthless financier Mr. Arkadin who hires small time smuggler Guy Van Stratten (Robert Arden) to investigate the amnesiac Arkadin's lost past and create a confidential report of his findings. Did the mysterious and elusive Mr. Arkadin simply want his criminal past uncovered? Or is his motive to erase a key missing piece of his past? As many fans know, the story of Mr. Arkadin's post-production and ascertaining which of the many versions is the most "Wellesian" is almost as mysterious as Guy Van Stratten's search for Gregory Arkadin's identity. Since the film is unfinished it does have an incomplete feel to it. For instance, it is very choppy with a few awkward jump cuts, there are lots of annoying overdubs that are not cleanly matched, the supporting cast is fairly weak and some scenes clearly needed to be reshot. However, the gems of the films are so precious, such as Welles's picturesque shots, unique camera angles, flashback story telling, and intricate plot, it's easy to overlook the shortcomings and classify Mr. Arkadin as essential Orson Welles.

Mr. Arkadin may have been written, directed and starred Orson Welles, but it sure wasn't edited by him. So the story goes, since it took Welles too long to complete the editing process, producer Louis Dolivet banned him from the editing room and never allowed Orson to get the final cut. Welles, who was known to say "All of the eloquence of my film is created in the editing room" disowned the film claiming it was the most butchered of all his works. There were many cuts made of the Mr. Arkadin film stock over the years, none of which are considered "definitive", all of which contain pieces to the overall puzzle. Fueled by their passion for film, along comes the Criterion Collection. Their mission, to take all the pieces of Mr. Arkadin's troubled past (the best available versions of the films, documented timelines, a reprinted version of the novel, scholarly documentaries and feature length commentaries), compile it and present it to fans in one incredibly comprehensive set letting them decide which is the real Arkadin. The Complete Mr. Arkadin (A.K.A. Confidential Report) includes digitally restored transfers of the two well known versions of the film (the flashback "Corinth" (99 minutes) version and the notorious linear "Confidential Report" (98 minutes)). In addition, there is a newly edited "comprehensive" version (105 minutes) pieced together by top Welles scholars who have an intimate understanding of his style, his creative direction, and thought process in the editing room. This new "comprehensive" version is the crown jewel of the set and without a doubt the best version of Mr. Arkadin ever released. While no one will ever know what Welles intended, you can’t help but feel this comprehensive version has got to be pretty darn close. Inevitably, purists may feel this is another instance of someone mucking with Welles's film stock, but in all honesty, the end result is stunning. So who is the real Mr. Arkadin? No one may ever know, but with the help of this set you have all you need to piece together the puzzle and draw your own conclusion. Enjoy. --Rob Bracco