The Small Back Room (The Criterion Collection) 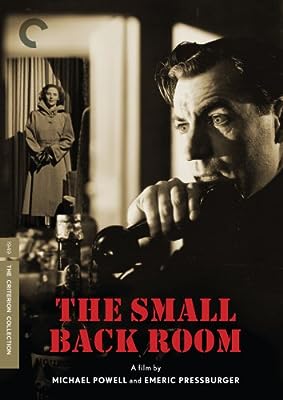 Price: $39.95
As of 2022-07-03 12:06:10 UTC (more info)
Product prices and availability are accurate as of 2022-07-03 12:06:10 UTC and are subject to change. Any price and availability information displayed on http://www.amazon.com/ at the time of purchase will apply to the purchase of this product.
Availability: Not Available - stock arriving soon
Buy Now from Amazon
Product Information (more info)
CERTAIN CONTENT THAT APPEARS ON THIS SITE COMES FROM AMAZON SERVICES LLC. THIS CONTENT IS PROVIDED 'AS IS' AND IS SUBJECT TO CHANGE OR REMOVAL AT ANY TIME.

After the lavish Technicolor spectacle of The Red Shoes, British filmmakers Michael Powell and Emeric Pressburger retreated into the inward, shadowy recesses of this moody, crackling character study. Based on the acclaimed novel by Nigel Balchin, The Small Back Room details the professional and personal travails of troubled, alcoholic research scientist and military bomb-disposal expert Sammy Rice (David Farrar), who, while struggling with a complex relationship with secretary-girlfriend Susan (Kathleen Byron), is hired by the government to advise on a dangerous new German weapon. Frank and intimate, deftly mixing suspense and romance, The Small Back Room is an atmospheric, post World War II gem.

In their career, the Archers--Michael Powell and Emeric Pressburger--made films both epic and intimate. The Small Back Room falls into the latter category. The interiors in this black-and-white picture, after a trio in Technicolor, are close and dimly lit, but rustic exteriors (including Stonehenge) and a surrealistic set piece add welcome flair. In 1943, Londoner Sammy Rice (David Farrar, quite good), a master at defusing incendiary devices, works for the Ministry of Defense. Whiskey helps to relieve the discomfort of a leg injury caused, presumably, by a mission gone wrong. As he tells girlfriend Susan (Kathleen Byron, softer than in Black Narcissus), who serves as secretary for the back-room boys, "It leaves me not caring whether it hurts or not." In order to decode Germany’s new booby-trapped bomb, the military enlists his expertise, but Rice's drinking problem makes him a liability. Noir, suspense, and documentary-style realism converge to create a sympathetic portrait of one man's struggle with shame and inadequacy, providing a link between Brief Encounter and The Lost Weekend. As critic Raymond Durgnat suggests, it isn’t "a 'story one follows', but a sensibility in which one bathes." This shadowy room may not be the best place to begin with the Archers, but it's a fine place with which to end. The Criterion Collection edition adds erudite commentary from author Charles Barr, an essay from Sight & Sound editor Nick James, an interview with cinematographer Chris Challis, and dictation excerpts from Powell's memoir, Million Dollar Movie. --Kathleen C. Fennessy