A Canterbury Tale (The Criterion Collection) 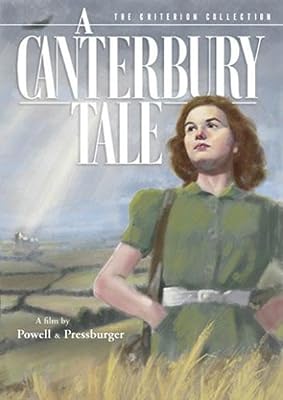 Price: $27.94
As of 2022-07-02 20:34:28 UTC (more info)
Product prices and availability are accurate as of 2022-07-02 20:34:28 UTC and are subject to change. Any price and availability information displayed on http://www.amazon.com/ at the time of purchase will apply to the purchase of this product.
Availability: Not Available - stock arriving soon
Buy Now from Amazon
Product Information (more info)
CERTAIN CONTENT THAT APPEARS ON THIS SITE COMES FROM AMAZON SERVICES LLC. THIS CONTENT IS PROVIDED 'AS IS' AND IS SUBJECT TO CHANGE OR REMOVAL AT ANY TIME.

A U.S. soldier, a British sergeant and a London girl see minor miracles and catch a prude.

One of the most beloved of all British films, A Canterbury Tale marks yet another occasion to celebrate the Criterion Collection's growing DVD legacy of Powell and Pressburger classics. Originally conceived as good-natured propaganda to support the British-American alliance of World War II, the film became something truly special in the hands of the Archers (a.k.a. writer/director/producers Michael Powell and Emeric Pressburger). Taking its literary cues from Chaucer's titular classic, it begins with a prologue that harkens back to Chaucer's time before match-cutting to present-day August of 1943, with the night-time arrival of U.S. Army Sgt. Bob Johnson (played with folksy charm by John Sweet, an actual American GI) on the shadowy platform of Canterbury station in the magically rural county of Kent (where Powell was born and raised). He is soon joined by two fellow train passengers: Alison Smith (Sheila Sim), a brashly independent recruit in the British Woman's Land Army; and Peter Gibbs (Dennis Price), a sergeant in the royal Army, and before long they're tracking clues to find "the glue man," a mysterious figure who's been pouring "the sticky stuff" on unsuspecting women as the midnight hour approaches. Their investigation leads to Thomas Colpeper (Eric Portman), a village squire whose local slide-shows celebrate life in an idyllic rural England threatened by wartime change. As Graham Fuller writes in an observant mini-essay that accompanies this DVD, is this a whodunit? Historical documentary? War film? Rustic comedy? It's all these and so much more: As photographed in glorious black and white by Erwin Hiller (faithfully preserved by one of Criterion's finest high-definition digital transfers), A Canterbury Tale has an elusive, magical quality that encompasses its trio of Canterbury "pilgrims" and translates into a an elusive, spiritually uplifting sense of elation that has made it an all-time favorite among film lovers around the world. --Jeff Shannon

On the DVDs
In addition to one of the most crisply detailed black-and-white transfers you're ever likely to see, disc 1 of A Canterbury Tale includes a feature-length commentary by film historian Ian Christie, author of the now out-of-print Arrows of Desire (the definitive study of Powell & Pressburger films) and a foremost authority on British films in general. Disc 2 is loaded with Canterbury extras, including a pleasant reminiscence by actress Sheila Sim; a documentary about John Sweet (who is seen visiting Canterbury in 2000, for the first time since filming A Canterbury Tale in 1943); and a charming new documentary that follows contemporary Canterbury "pilgrims" as they revisit locations used in the film. There's also "Listen to Britain," a seven-minute video-installation piece inspired by A Canterbury Tale by artist Victor Burgin (and programmed to loop from start to finish and back again, as it did in museums); and the original "Listen to Britain," by Humphrey Jennings--a classic wartime documentary from the classic era of British non-fiction film that celebrates the sights, and especially the sounds, of rural England in the early 1940s. All in all, these are excellent features that place A Canterbury Tale in evocative historical context. --Jeff Shannon