The Films of Michael Powell: A Matter of Life and Death (Stairway to Heaven) / Age of Consent 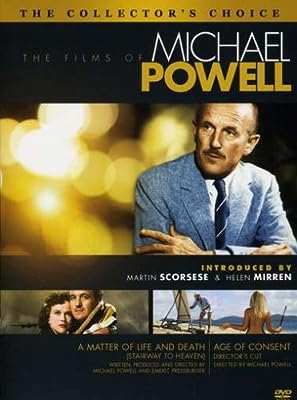 Price: $19.99
As of 2022-07-03 16:13:50 UTC (more info)
Product prices and availability are accurate as of 2022-07-03 16:13:50 UTC and are subject to change. Any price and availability information displayed on http://www.amazon.com/ at the time of purchase will apply to the purchase of this product.
Availability: Not Available - stock arriving soon
Buy Now from Amazon
Product Information (more info)
CERTAIN CONTENT THAT APPEARS ON THIS SITE COMES FROM AMAZON SERVICES LLC. THIS CONTENT IS PROVIDED 'AS IS' AND IS SUBJECT TO CHANGE OR REMOVAL AT ANY TIME.

As part of the legendary filmmaking team known as "The Archers," Michael Powell, in partnership with Emeric Pressburger, created a string of masterpieces that continue to dazzle and enchant audiences the world over. A Matter Of Life And Death (Stairway To Heaven) is one of the highlights of their incredible body of work. The film tells the story of a British airman (David Niven) who must plead his case in Heaven's court so he may return to Earth to be with the woman he loves (Kim Hunter). Age Of Consent, the last feature film directed by Michael Powell, stars James Mason as a frustrated painter who seeks new inspiration in Australia - and finds it in the form of a young island girl (Helen Mirren). Eagerly awaited, these two treasures, available for the first time on DVD, belong in every movie lover's collection.

A true marvel, A Matter of Life and Death is one of the best films by the storied English filmmaking team known as the Archers: Michael Powell and Emeric Pressburger. Among other felicities, this 1946 fantasy has one of the most crackling opening ten minutes of any movie you'll ever see: after a deceptively dreamy prologue, we are thrown into the conversation between an airman (David Niven) whose torched plane is about to crash in the English Channel, and an American military radio operator (Kim Hunter) operating the radio on the ground. Their touching exchange, made urgent by his imminent death, is breathtakingly visualized (you have never seen a WWII plane interior quite as vividly as this). What follows is glorious: Niven's death has been missed by an otherworldly collector (Marius Goring)--all that thick English fog, you know--and so he gets to argue his case for life before a heavenly tribunal. The heaven sequences are in pearly black-and-white, the earthly material in stunning Technicolor (the color is the cause of a particularly good in-joke). The Powell-Pressburger brief on behalf of humanity is both romantic and witty, and the wonderful cast is especially enriched by Roger Livesey (the star of Powell and Pressburger's The Life and Death of Colonel Blimp), as a doctor with a camera obscura and an enormous heart.

Age of Consent, the other film in this two-disc set, comes from a much later period in Powell's career--indeed, close to the end of it. Made on a low budget in Australia in 1969, the movie depicts a disenchanted painter (James Mason) finding renewal in the isolation of an island and the beauty of the young woman (Helen Mirren) who models for him. The salt-and-pepper authority of Mason and the nubile freshness of Mirren give pleasure, although the theme is too on-the-nose (and Jack MacGowran's comic relief too broad) for a really subtle take on Powell's part. Extras include a seven-minute Martin Scorsese comment for AMOLAD, and a commentary track on that film by Powell-Pressburger authority Ian Christie; Scorsese chimes in again for Age of Consent, as does Helen Mirren, whose memories of her first movie are specific and fond. Kent Jones contributes the commentary track, a 10-minute interview with underwater photographers Ron and Valerie Taylor includes some Mirren comments, and a 16-minute making-of documentary gives some flavor of the set, including the memories of Powell's son Kevin. --Robert Horton