The Thief of Bagdad (The Criterion Collection) 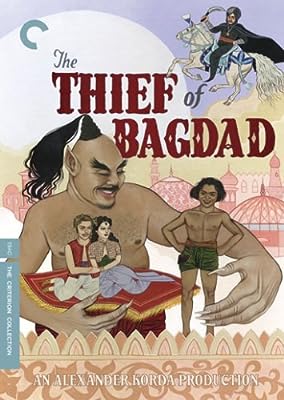 Price: $39.95
As of 2022-07-02 20:52:05 UTC (more info)
Product prices and availability are accurate as of 2022-07-02 20:52:05 UTC and are subject to change. Any price and availability information displayed on http://www.amazon.com/ at the time of purchase will apply to the purchase of this product.
Availability: Not Available - stock arriving soon
Buy Now from Amazon
Product Information (more info)
CERTAIN CONTENT THAT APPEARS ON THIS SITE COMES FROM AMAZON SERVICES LLC. THIS CONTENT IS PROVIDED 'AS IS' AND IS SUBJECT TO CHANGE OR REMOVAL AT ANY TIME.

Legendary producer Alexander Korda's marvel The Thief of Bagdad, inspired by The Arabian Nights, is one of the most spectacular fantasy films ever made, an eye-popping effects pioneer brimming with imagination and technical wizardry. When Prince Ahmad (John Justin) is blinded and cast out of Bagdad by the nefarious Jaffar (Conrad Veidt), he joins forces with the scrappy thief Abu (the incomparable Sabu, in his definitive role) to win back his royal place, as well as the heart of a beautiful princess (June Duprez). With its luscious Technicolor, vivid sets, and unprecedented visual wonders, The Thief of Bagdad has charmed viewers of all ages for decades.

Often hailed as the greatest fantasy film ever made, The Thief of Bagdad (1940) was producer Alexander Korda's crowning achievement. Deservedly winning Academy Awards for art direction, color cinematography, and special effects, this Arabian Nights adventure appeals to all ages with its fantastical tale of Abu (Sabu), the little thief who befriends the prince of Bagdad (John Justin) and foils the nefarious plans of the evil grand vizier (Conrad Veidt), who seizes control of Bagdad and covets the princess of Basra (Joan Duprez). From its gorgeous, epic-scale sets to flying horses, magic carpets, and, best of all, Rex Ingram's towering jinni of the bottle, this Thief has all the magic of the tales that inspired it, and vibrant Technicolor brings it all to life in dazzling style. Six esteemed directors worked on this infamously troubled production, but the final result exceeded all expectations, becoming an instant classic that endures to this day. --Jeff Shannon