The Road To Life 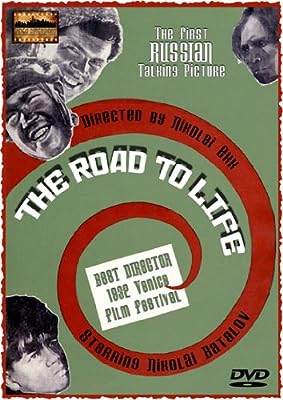 Price: $16.95
As of 2022-10-07 00:27:40 UTC (more info)
Product prices and availability are accurate as of 2022-10-07 00:27:40 UTC and are subject to change. Any price and availability information displayed on http://www.amazon.com/ at the time of purchase will apply to the purchase of this product.
Availability: Not Available - stock arriving soon
Buy Now from Amazon
Product Information (more info)
CERTAIN CONTENT THAT APPEARS ON THIS SITE COMES FROM AMAZON SERVICES LLC. THIS CONTENT IS PROVIDED 'AS IS' AND IS SUBJECT TO CHANGE OR REMOVAL AT ANY TIME.

"The Road To Life" is an important film in the history of Russian cinema. Directed by Nikolai Ekk, heir to Eisenstein & Pudovkin, this was the first sound feature made in the Soviet Union. Its power comes from one source: authenticity. You won't forget the faces of these street boys and the perfect mix of professional and non-professional actors.

"The Road To Life" is a equivalent to the gritty realism of the William Wellman classic "Wild Boys Of The Road". Trapped by poverty in a life of petty crime, these street toughs are on the road top a dead end future. One man's is making the effort to make a difference and aid the troubled teens by try to mold them into worthwhile members of society. They are moved to a commune where they will learn useful trades, but will also have to ?gure out an ethical code by which to run their lives. Their struggle is uplifting, but there are many traps along the path to personal integrity.

DVD EXTRAS:
The Rink (1927) - A delightful animated silent film from the same studio (Mezhrabpomfilm) that released "The Road To Life". With simple stick-like figures, director N. Bartram. creates a whimsical portrait of an afternoon's adventures at a skating rink.
The Insect's Christmas (1913) - Famed Polish animator Ladislaw Starewicz creates one of the finest pieces of stop- motion animation ever seen. Using frogs and insects as his protagonists, Starewicz creates one of the most fascinating of all Christmas stories.

The Cranes are Flying (The Criterion Col...