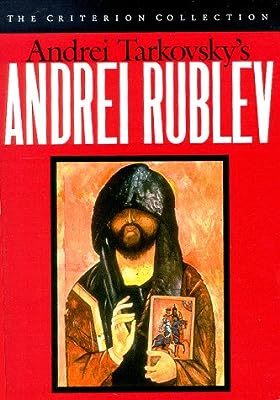 Price: $28.88
As of 2022-08-11 18:30:51 UTC (more info)
Product prices and availability are accurate as of 2022-08-11 18:30:51 UTC and are subject to change. Any price and availability information displayed on http://www.amazon.com/ at the time of purchase will apply to the purchase of this product.
Availability: Not Available - stock arriving soon
Buy Now from Amazon
Product Information (more info)
CERTAIN CONTENT THAT APPEARS ON THIS SITE COMES FROM AMAZON SERVICES LLC. THIS CONTENT IS PROVIDED 'AS IS' AND IS SUBJECT TO CHANGE OR REMOVAL AT ANY TIME.

Andrei Rublev was considered the most historically audacious and controversial production in the twenty-odd years since Sergei Eisenstein's Ivan the Terrible, and even though it was only legendary Russian director Andrei Tarkovsky's second feature, it is looked at as being his greatest achievement, and one of the greatest art films about the life of an artist ever made. Andrei Rublev which Tarkovsky called a "film of the earth," is set against the background of 14th century Russia, as the film is only loosely based on the life of the great icon painter, and seeks to depict a bleak and violent portrait of medieval Russia

The 15th-century Russian icon painter renounces his art after taking part in a peasant uprising. Directed by Andrei Tarkovsky.

At last, the complete version of Andrei Tarkovski's 1966 masterpiece about the great 15th century Russian icon painter (a film suppressed by the Soviet Union and unseen until 1971) is available. It's a complex and demanding narrative about the responsibility of the artist to participate in history rather than documenting it from a safe distance. A landmark in Russian cinema, Andrei Rublev is a beautifully lyrical black-and-white film about harmony and soulful expression. As the late filmmaker says in a supplementary interview, each generation must experience life for itself; it cannot simply absorb what has preceded it. In fact, a whole host of supplements accompanies the film in this Criterion Collection release. Stick with it; it's worth the effort. --Bill Desowitz

Andrei Tarkovsky wanted to create a film that showed an artist as a world-historic figure, as its story is about the essence of art and the importance of faith, showing an artist who tries to find the appropriate response to the tragedies of his time. Too experimental, too frightening, too gory, and too politically complicated, Andrei Rublev was not allowed to be released domestically in the officially atheist and authoritarian Soviet Union for years after it was completed, except for a single screening in Moscow. The films brutal depiction of violence, torture and cruelty toward animals, quickly gained controversy and gotten Tarkovsky into trouble with Soviet authorities, almost driving him into exile. And yet the film projects a sense of an entire world, a harsh and brutal force trying to assault ones senses while one views the naturalistic, disturbing and transcendental images Tarkovsky beautifully places up on the screen.