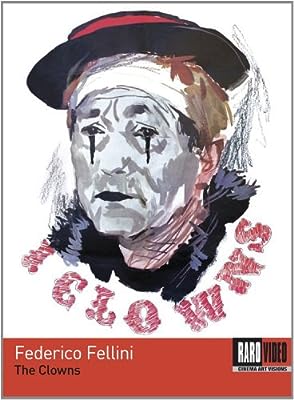 Price: $17.68
As of 2022-10-02 07:36:55 UTC (more info)
Product prices and availability are accurate as of 2022-10-02 07:36:55 UTC and are subject to change. Any price and availability information displayed on http://www.amazon.com/ at the time of purchase will apply to the purchase of this product.
Availability: Not Available - stock arriving soon
Buy Now from Amazon
Product Information (more info)
CERTAIN CONTENT THAT APPEARS ON THIS SITE COMES FROM AMAZON SERVICES LLC. THIS CONTENT IS PROVIDED 'AS IS' AND IS SUBJECT TO CHANGE OR REMOVAL AT ANY TIME.

Fellini’s fascination with the circus and the surreal come to a head in one of his final masterpieces, The Clowns. The film reflects Fellini’s childhood obsession with clowns and begins with a young boy watching a circus set up from his bedroom window. Though comical and referred to as a “docu-comedy”, this film explores deeper human conditions such as authority, poverty, humility and arrogance, all of which manifest themselves through the characters of the clowns who vary from the local sex-crazed hobo, a midget nun, to a mutilated Mussolini disciple. Featuring Anita Ekberg, the star of his 1960’s masterpiece, La Dolce Vita and the director himself.