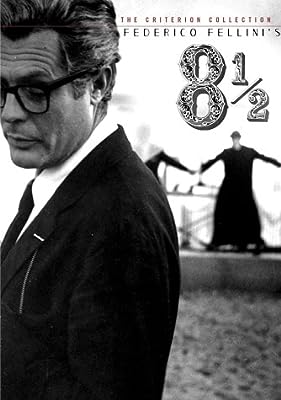 Price: $39.95
As of 2022-08-16 06:06:07 UTC (more info)
Product prices and availability are accurate as of 2022-08-16 06:06:07 UTC and are subject to change. Any price and availability information displayed on http://www.amazon.com/ at the time of purchase will apply to the purchase of this product.
Availability: Not Available - stock arriving soon
Buy Now from Amazon
Product Information (more info)
CERTAIN CONTENT THAT APPEARS ON THIS SITE COMES FROM AMAZON SERVICES LLC. THIS CONTENT IS PROVIDED 'AS IS' AND IS SUBJECT TO CHANGE OR REMOVAL AT ANY TIME.

One of the greatest films about film ever made, Federico Fellini's 8 1/2 (Otto e Mezzo) turns one man's artistic crisis into a grand epic of the cinema. Guido Anselmi (Marcello Mastroianni) is a director whose film-and life-is collapsing around him. An early working title for the film was La Bella Confusione (The Beautiful Confusion), and Fellini's masterpiece is exactly that: a shimmering dream, a circus, and a magic act. The Criterion Collection is proud to present the 1963 Academy Award® winner for Best Foreign-Language Film-one of the most written about, talked about, and imitated movies of all time-in a beautifully restored new digital transfer. Disc two features Fellini's rarely seen first film for television, Fellini: A Director's Notebook (1969). Produced by Peter Goldfarb, this imagined documentary of Fellini is a kaleidoscope of unfinished projects, all of which provide a fascinating and candid window into the director's unique and creative process.

Spirits of the Dead (Histoires extraordi...