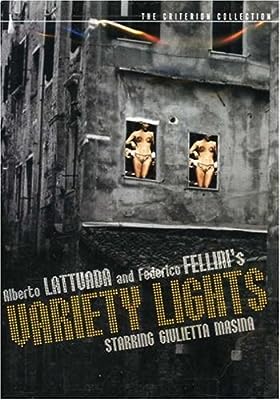 Price: $116.55
As of 2021-10-22 19:18:46 UTC (more info)
Product prices and availability are accurate as of 2021-10-22 19:18:46 UTC and are subject to change. Any price and availability information displayed on http://www.amazon.com/ at the time of purchase will apply to the purchase of this product.
Availability: Not Available - stock arriving soon
Buy Now from Amazon
Product Information (more info)
CERTAIN CONTENT THAT APPEARS ON THIS SITE COMES FROM AMAZON SERVICES LLC. THIS CONTENT IS PROVIDED 'AS IS' AND IS SUBJECT TO CHANGE OR REMOVAL AT ANY TIME.

Federico Fellini codirected this film from his own story about a romance between an ambitious young dancer and the aging manager of a variety theater in Rome. It's a sharply realized first effort, showing that Fellini could work his magic even in 1950. The dancer--played with luscious, complicated innocence by Carla del Poggio--talks her way into Signor Checco's troupe by showing him her legs. The others, including his girlfriend (Giulietta Masina), protest, but Checco takes her into the poverty-stricken group anyway. Soon enough, he is justified: Their sparsely attended shows are suddenly packed with men stomping their feet and whistling for "the Redhead." Checco not-so-secretly wants her himself, and she lets him think he might get her (even while looking for someone else with money.) The film's many lively performances include Giulietta Masina, whose eyes register pluck, resignation, and weariness in a moment as she watches her guy fall in love. Poggio is good, too: When she gets what she wants, her face slides into a quiver of doubt about its value. Self-delusion, arguably the main arrow in Fellini's quiver of themes, gets a subtly layered treatment here, and Fellini, so extravagant later in his career, shows an early talent for, of all things, restraint. --Lyall Bush

Spirits of the Dead (Histoires extraordi...