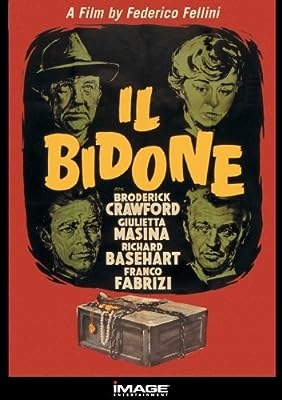 Price: $24.98
As of 2022-10-05 01:50:13 UTC (more info)
Product prices and availability are accurate as of 2022-10-05 01:50:13 UTC and are subject to change. Any price and availability information displayed on http://www.amazon.com/ at the time of purchase will apply to the purchase of this product.
Availability: Not Available - stock arriving soon
Buy Now from Amazon
Product Information (more info)
CERTAIN CONTENT THAT APPEARS ON THIS SITE COMES FROM AMAZON SERVICES LLC. THIS CONTENT IS PROVIDED 'AS IS' AND IS SUBJECT TO CHANGE OR REMOVAL AT ANY TIME.

In Fellini's sardonically humorous, yet powerfully dramatic IL BIDONE, three small-time crooks impersonate priests in Rome to con poor people out of their money. Academy Award winner Broderick Crawford is extraordinary as the group's world weary leader, whose chance meeting with his daughter opens his eyes to his wrongdoing. Too late, he suffers a crisis of conscience in this absorbing tale of hope, desperation and, finally, redemption. One of Fellini's most realistic films, IL BIDONE begins as an Italian comedy of errors, its swindles reminiscent of The Sting, yet there is true sting in its harsh portrayal of greed and squalor. The middle chapter in Fellini's "trilogy of loneliness" between La Strada and Nights of Cabiria, this classic film will tug at your heart and astonish you with its aching sense of compassion. Music by Nino Rota (The Godfather, Rocco and His Brothers).