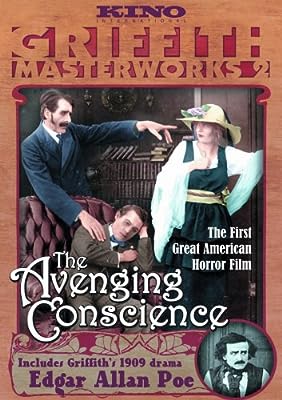 Price: $89.99
As of 2023-02-02 00:19:25 UTC (more info)
Product prices and availability are accurate as of 2023-02-02 00:19:25 UTC and are subject to change. Any price and availability information displayed on http://www.amazon.com/ at the time of purchase will apply to the purchase of this product.
Availability: Not Available - stock arriving soon
Buy Now from Amazon
Product Information (more info)
CERTAIN CONTENT THAT APPEARS ON THIS SITE COMES FROM AMAZON SERVICES LLC. THIS CONTENT IS PROVIDED 'AS IS' AND IS SUBJECT TO CHANGE OR REMOVAL AT ANY TIME.

D.W. Griffith indulged his lifelong fascination with Edgar Allan Poe in this ambitious amalgam of the writer s poetry and prose: Annabel Lee and The Tell-Tale Heart, flavored with shades of The Pit and the Pendulum, The Black Cat, and The Conqueror Worm. Poe s tales are interwoven in one tragedy-laden narrative of a young man (Henry B. Walthall) who yearns to escape from his overbearing, one-eyed uncle (Spottiswoode Aitken). After the nephew murders the ogre, he and his lover (Blanche Sweet) are wracked by guilt and tormented by nightmares, ghosts, and demonic entities that drive them to even more horrifying extremes. Just as Poe cloaked his horrors in artful poetry and prose, so does Griffith filter the story s macabre elements through a Victorian lens, gilding it with quaint symbolism without diminishing its impact. When asked, in 1925, to rank the cinema s greatest achievements, critic Gilbert Seldes called special attention to this film. The picture was projected in a palpable atmosphere, he wrote in his book The Seven Lively Arts, After ten years I recall dark masses and ghostly rays of light.