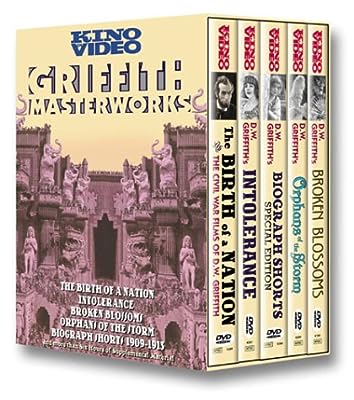 Price: $52.31
As of 2023-02-07 05:45:22 UTC (more info)
Product prices and availability are accurate as of 2023-02-07 05:45:22 UTC and are subject to change. Any price and availability information displayed on http://www.amazon.com/ at the time of purchase will apply to the purchase of this product.
Availability: Not Available - stock arriving soon
Buy Now from Amazon
Product Information (more info)
CERTAIN CONTENT THAT APPEARS ON THIS SITE COMES FROM AMAZON SERVICES LLC. THIS CONTENT IS PROVIDED 'AS IS' AND IS SUBJECT TO CHANGE OR REMOVAL AT ANY TIME.

Although the DVDs included in Griffith Masterworks are available separately, they gain even greater significance in this stupendous boxed-set compilation. The title is no understatement: These four features and 30 short films comprise the crowning achievements in D.W. Griffith's pioneering legacy, spanning the director's progress from cinematic innovator (the Biograph shorts, 1909-13) to his ambitious creation of the controversial epics The Birth of a Nation (1915) and Intolerance (1916), and his mastery of the emotionally intense melodramas Broken Blossoms (1919) and Orphans of the Storm (1921). Griffith's artistic growth is evident throughout, as he moves from the static camera of the Biograph years to his groundbreaking development of cinematic grammar including close-ups, parallel editing, and mobile-camera action. The historical importance of these films has long been established; they're available here in the best available condition, carefully preserved with the illuminating perspective of history.

That perspective extends to the set's impressive bonus features, representing an unprecedented wealth of archival material exclusive to these DVDs. Appropriately, The Birth of a Nation is closely examined through vintage and latter-day materials, including a peculiar 1930 prologue featuring Walter Huston and Griffith himself, musing over the film's ongoing battle with censorship; archival documents further examine the charges of racism that plagued the film for decades. Other highlights include Lillian Gish's introduction to Broken Blossoms, filmed for the 1970s TV series The Silent Years; two filmed introductions featuring Orson Welles (for Intolerance and Orphans of the Storm); and a rare look at Griffith acting in the 1908 short "Rescued from the Eagle's Nest." A veritable goldmine for home or classroom viewing, Griffith Masterworks is an essential addition to any collection of classic silent cinema. --Jeff Shannon