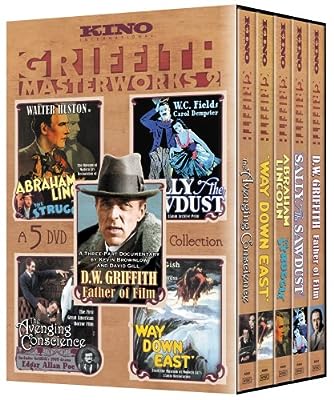 Price: $89.95
As of 2022-11-28 09:38:51 UTC (more info)
Product prices and availability are accurate as of 2022-11-28 09:38:51 UTC and are subject to change. Any price and availability information displayed on http://www.amazon.com/ at the time of purchase will apply to the purchase of this product.
Availability: Not Available - stock arriving soon
Buy Now from Amazon
Product Information (more info)
CERTAIN CONTENT THAT APPEARS ON THIS SITE COMES FROM AMAZON SERVICES LLC. THIS CONTENT IS PROVIDED 'AS IS' AND IS SUBJECT TO CHANGE OR REMOVAL AT ANY TIME.

WAY DOWN EAST (1920) (MOMA S 35mm RESTORATION) - D.W. Griffith s penchant for Victorian melodrama reached its height of expression in WAY DOWN EAST. Lillian Gish stars as a small-town girl who is seduced, impregnated, and cast aside by Lennox Sanderson, a wealthy playboy (Lowell Sherman). To escape the shame of having a fatherless child, Anna changes her name and starts a new life in a small farming community, where she meets David, an icon of male virtue and decency (Richard Barthelmess). Their delicate happiness is threatened when Lennox arrives in town, and word of Anna s unsavory past begins to spread.

D.W. GRIFFITH: FATHER OF FILM (1993) - In this acclaimed three-part documentary, celebrated film historians Kevin Brownlow and David Gill (Unknown Chaplin, Buster Keaton: A Hard Act to Follow) tell the proud, sad story of D.W. Griffith (1875-1948): the man who first brought artistry and ambition to the movies, and then, having dragged a reluctant American film industry to international prominence, found it had no more use for him.

THE AVENGING CONSCIENCE (1914) - D.W. Griffith indulged his lifelong fascination with Edgar Allan Poe in this ambitious amalgam of the writer s poetry and prose: (Annabel Lee) and (The Tell-Tale Heart), flavored with shades of (The Pit and the Pendulum), (The Black Cat), and (The Conqueror Worm). Poe s tales are interwoven in one tragedy-laden narrative of a young man (Henry B. Walthall) who yearns to escape from his overbearing, one-eyed uncle (Spottiswoode Aitken). After the nephew murders the ogre, he and his lover (Blanche Sweet) are wracked by guilt and tormented by nightmares, ghosts, and demonic entities that drive them to even more horrifying extremes. INCLUDES GRIFFITH S 1909 7 MINUTE SHORT EDGAR ALLAN POE.

ABRAHAM LINCOLN (1930) / THE STRUGGLE (1931) (DOUBLE FEATURE) - The silent cinema s renowned pioneer, D.W. Griffith, directed only two sound features: ABRAHAM LINCOLN (1930) and THE STRUGGLE (1931), both double-billed on this DVD. Returning to the historic era of his greatest success, Griffith paid homage to the sixteenth President in this moving drama starring Walter Huston (The Treasure of the Sierra Madre). Focusing on Lincoln s personal tragedies, as well as his great accomplishments, Griffith s film depicts the American icon with a sensitivity and grace rivaled only by John Ford s Young Mr. Lincoln. A departure from the historical super-productions for which he was known, THE STRUGGLE was an intimate drama of an American everyman who falls victim to the debilitating affliction of alcoholism. No stranger to the destructive influence of drink, Griffith pulls no punches in dramatizing its potential horrors, especially in the terrifying climax when Jimmie, tormented by delirium tremors, attacks his young daughter (Edna Hagan) in the hovel that was once their happy home. ABRAHAM LINCOLN has been mastered in HD from the MUSEUM OF MODERN ARTS 35mm restoration of Griffith s historical epic. THE STRUGGLE was remastered in HD from a 35mm archive print from the Raymond Rohauer Collection.

SALLY OF THE SAWDUST (1925) - In a fascinating departure from the austere moral drama in which he specialized, D.W. Griffith demonstrates his talent for warm-hearted comedy with SALLY OF THE SAWDUST. Fresh from the Ziegfeld Follies, W.C. Fields made his second screen appearance as Professor Eustace McGargle, a lovably disreputable confidence man who becomes the unlikely guardian of an orphaned circus waif (Carol Dempster).

THESE DVDs ARE LOADED WITH EXTRAS.