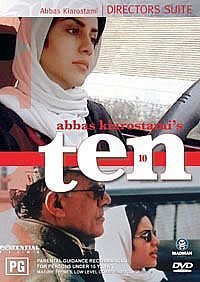 Price:
As of 2023-02-05 02:06:33 UTC (more info)
Product prices and availability are accurate as of 2023-02-05 02:06:33 UTC and are subject to change. Any price and availability information displayed on http://www.amazon.com/ at the time of purchase will apply to the purchase of this product.
Availability: Not Available - stock arriving soon
Buy Now from Amazon
Product Information (more info)
CERTAIN CONTENT THAT APPEARS ON THIS SITE COMES FROM AMAZON SERVICES LLC. THIS CONTENT IS PROVIDED 'AS IS' AND IS SUBJECT TO CHANGE OR REMOVAL AT ANY TIME.

A perceptive and revealing portrait of contemporary Iran set in Tehran, Ten begins with a beautiful and articulate female driver (the beguiling Mania Akbari) picking up her young son from school. After boldly revealing in a less than harmonious exchange that the woman has divorced her husband, the film goes on to meditatively explore the relationships that develop between the driver and her disparate passengers over the course of ten brief but intricately mapped-out journeys. Voted the most important director of the 1990s in an extensive poll of US critics, Ten more than confirms Iranian filmmaker Abbas Kiarostami's cinematic standing. The creator of such meticulous works as Through the Olive Trees, The Taste of Cherry and The Wind Will Carry Us, Ten offers a continuation and development of his perennial themes and distinctive visual aesthetic whilst also succeeding as a satisfying and hugely compelling human drama. Set entirely within the single location of the car's interior and shot with just a handful of actors on digital video, Kiarostami delivers a humane, emotive and intelligent analysis of contemporary life and a radical yet intimate exploration of the wondrous possibilities of the cinematic medium.

Triumph of the Will (Special Edition)