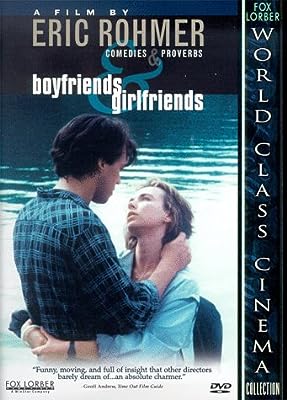 Price: $19.98
As of 2022-10-07 17:07:41 UTC (more info)
Product prices and availability are accurate as of 2022-10-07 17:07:41 UTC and are subject to change. Any price and availability information displayed on http://www.amazon.com/ at the time of purchase will apply to the purchase of this product.
Availability: Not Available - stock arriving soon
Buy Now from Amazon
Product Information (more info)
CERTAIN CONTENT THAT APPEARS ON THIS SITE COMES FROM AMAZON SERVICES LLC. THIS CONTENT IS PROVIDED 'AS IS' AND IS SUBJECT TO CHANGE OR REMOVAL AT ANY TIME.

The title of Eric Rohmer's sixth and final film in his Comedies and Proverbs series, Boyfriends and Girlfriends, makes much more sense in its original French form: L'ami de mon amie (The Friend of My Friend). In this series, each stand-alone film is based on a proverb, in this case, "the friends of my friends are my friends." Thus when conservative 24-year-old Blanche (the beautiful and talented Emmanuelle Chaulet) is befriended by wild-child 22-year-old Lea (the exotic Sophie Renoir), they find themselves each tempted by the love interests of the other. Fabien (Eric Viellard) is Lea's long-term beau, into windsurfing and hiking, which fills Lea with ennui; she'd much rather party all night. Blanche is besotted with Alexandre (François-Eric Gendron), a ladies' man who barely acknowledges her existence and who is dating Adrienne (Anne-Laure Meury). But of course, as things always go, Fabien is enamoured with the sporty Blanche, and Alexandre finds Lea irresistible.

In typical Rohmer fashion, the film is heavy on dialogue and light on action. By stripping away the veneer--no unusual camera work, no elaborate settings, no pounding soundtrack--Rohmer is able to effectively focus on the empty lives of the modern suburbanites (they all live in a spanking-clean suburb of Paris, Clergy-Pontoise, where the sparseness of the apartments and streets echoes their lives) and his New Wave influences show in the simple theme, the fickle nature of the heart. Yet his characters are immensely likable and their situations comical and ordinary enough for the viewer to relate to. This is an excellent entry into the world of Eric Rohmer for the New Wave neophyte and a refreshing, lighter outing for those who are already fans. --Jenny Brown