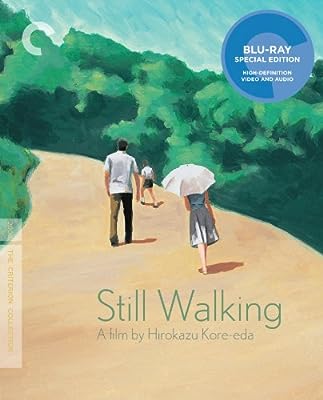 Price: $24.02
As of 2022-08-14 17:18:19 UTC (more info)
Product prices and availability are accurate as of 2022-08-14 17:18:19 UTC and are subject to change. Any price and availability information displayed on http://www.amazon.com/ at the time of purchase will apply to the purchase of this product.
Availability: Not Available - stock arriving soon
Buy Now from Amazon
Product Information (more info)
CERTAIN CONTENT THAT APPEARS ON THIS SITE COMES FROM AMAZON SERVICES LLC. THIS CONTENT IS PROVIDED 'AS IS' AND IS SUBJECT TO CHANGE OR REMOVAL AT ANY TIME.

The lyrical, profoundly moving STILL WALKING is the most personal work to date from contemporary Japanese master Hirokazu Kore-eda (Maborosi, After Life, Nobody Knows). Fashioned as a tribute to his parents, the film depicts one day in the life of the Yokoyamas, gathered together for a celebratory ritual that only gradually makes itself clear. Rather than focus on big dramatic moments, Kore-eda relies on simple gestures and domestic routines (especially cooking) to evoke a family's entire life, its deep regrets and its daily joys. Featuring vivid, heartrending performances and a gentle naturalism that harks back to the director's earlier, documentary work, STILL WALKING is an extraordinary portrayal of the ties that bind us.