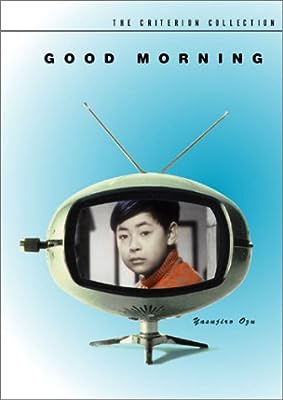 Price: $39.99
As of 2023-02-04 23:15:39 UTC (more info)
Product prices and availability are accurate as of 2023-02-04 23:15:39 UTC and are subject to change. Any price and availability information displayed on http://www.amazon.com/ at the time of purchase will apply to the purchase of this product.
Availability: Not Available - stock arriving soon
Buy Now from Amazon
Product Information (more info)
CERTAIN CONTENT THAT APPEARS ON THIS SITE COMES FROM AMAZON SERVICES LLC. THIS CONTENT IS PROVIDED 'AS IS' AND IS SUBJECT TO CHANGE OR REMOVAL AT ANY TIME.

Ozu's hilarious Technicolor re-working of his silent I Was Born, But. . ., Good Morning (Ohayo) is the story of two young boys in suburban Tokyo who take a vow of silence after their parents refuse to buy them a television set. Shot from the perspective of the petulant brothers, Good Morning is an enchantingly satirical portrait of family life that gives rise to gags about romance, gossip, and the consumerism of modern Japan.

By the time he made Good Morning in 1959, Yasujiro Ozu had completely eliminated camera movement from his uniquely simple but elegant directorial style. He chose instead to emphasize static but meticulously purposeful compositions that rarely, if ever, wavered from their recognizable low-angle perspective. In Good Morning, this observational approach is put to sublime use to establish setting (a late-'50s Tokyo suburb) and to view the world through the eyes of the film's central characters—-two young brothers who take a mutual vow of silence to protest their parents' refusal to buy a TV set. Their father claims that television will create "a million idiots," while their mother is angered by the boys' neglect of schoolwork in favor of watching sumo wrestling on a neighbor's TV.

In Ozu's hands, this sublimely simple conflict inspires a comedic exploration of Japan at the dawn of its electronic age, when consumerism and materialism are in vogue, salesmen solicit their wares in constant door-to-door visits, and even the purchase of a washing machine can prompt neighbors into a frenzy of gossipy speculation. Funniest of all are the conspiratorial brothers, who play an amusing variation of "pull my finger" (proving that even great directors can indulge a fart joke if they choose), and employ their silent strategy with the stubbornness that only children can get away with. Through it all, Ozu develops a handful of intermingling themes of love, communication, goodwill, and the changing of societal traditions. Utterly simple on the surface, Good Morning reveals its complexity in careful proportion, with the affectionate humanity that was Ozu's greatest gift. --Jeff Shannon