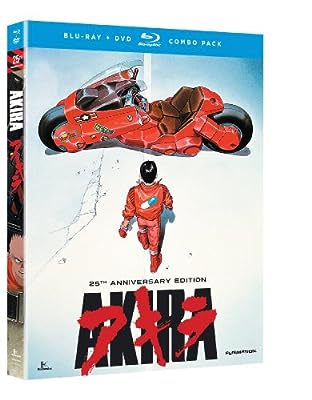 Price: $17.99
As of 2022-08-15 16:36:37 UTC (more info)
Product prices and availability are accurate as of 2022-08-15 16:36:37 UTC and are subject to change. Any price and availability information displayed on http://www.amazon.com/ at the time of purchase will apply to the purchase of this product.
Availability: Not Available - stock arriving soon
Buy Now from Amazon
Product Information (more info)
CERTAIN CONTENT THAT APPEARS ON THIS SITE COMES FROM AMAZON SERVICES LLC. THIS CONTENT IS PROVIDED 'AS IS' AND IS SUBJECT TO CHANGE OR REMOVAL AT ANY TIME.

Akira isn’t just a movie – it’s the genesis of a genre. Katsuhiro Otomo’s landmark cyberpunk classic obliterated the boundaries of Japanese animation and forced the world to look into the future. Akira’s arrival shattered traditional thinking, creating space for movies like the The Matrix to be dreamed into brutal reality. Without Kaneda and Tetsuo, without espers and psionic assassins, without that badass motorcycle – our world would be a far less exciting place to exist. But the manga became the movie and the movie became a phenomenon and the world took notice. Now, Akira is everywhere. If you can’t see it in the streets – if you can’t feel it crawling around inside your brain – then you have yet to be initiated. What. Are. You. Waiting. For?

• Listen How You Want: The 25th Anniversary release of Akira features both English dubs that have occurred since 1988, letting you choose the track that’s best for you.

• Exploding with Extras: Packed with over 120 minutes of on-disc extra features; including the “Restoring Akira” documentary and original storyboards for the anime.