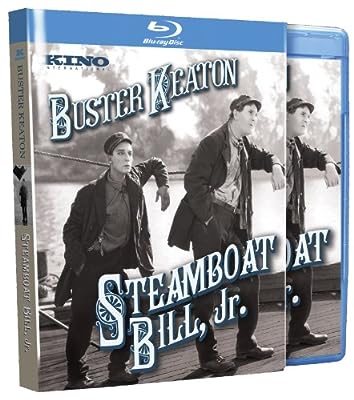 Price: $24.98
As of 2023-02-05 03:28:02 UTC (more info)
Product prices and availability are accurate as of 2023-02-05 03:28:02 UTC and are subject to change. Any price and availability information displayed on http://www.amazon.com/ at the time of purchase will apply to the purchase of this product.
Availability: Not Available - stock arriving soon
Buy Now from Amazon
Product Information (more info)
CERTAIN CONTENT THAT APPEARS ON THIS SITE COMES FROM AMAZON SERVICES LLC. THIS CONTENT IS PROVIDED 'AS IS' AND IS SUBJECT TO CHANGE OR REMOVAL AT ANY TIME.

The last of the independent features made in the prime of Buster Keaton s career, STEAMBOAT BILL, JR. is a large-scale follow-up to The General, substituting a Mississippi paddlewheel for the locomotive, and replacing the spectacle of the Civil War with a catastrophic hurricane. Keaton stars as William Canfield, Jr., a Boston collegian who returns to his deep-southern roots to reunite with his father, a crusty riverboat captain (Ernest Torrence) who is engaged in a bitter rivalry with a riverboat king coincidentally, the father of Willie s sweetheart (Marion Byron). Keaton s athleticism and gift for inventive visual humor are in top form, and the cyclone that devastates a town (and sends houses
literally crashing down around him) is perhaps the most ambitious, awe-inspiring and hilarious slapstick sequence ever created. In the silent era, it was common practice for filmmakers to create two
separate negatives of their films, each comprised of differing takes and camera angles. This definitive Blu-ray edition contains both versions of STEAMBOAT BILL, JR. the Buster Keaton Estate version and the Killiam Shows Archive version each mastered from archival 35mm materials. All new Special Features include: Complete alternate version of Steamboat Bill, Jr., comprised entirely of variant takes and camera angles, Music by The Biograph Players presented in DTS-HD, Master Audio 5.1, Organ score by Lee Erwin, Piano score by William Perry, Documentary on the making of the film, Stills Gallery, Why They Call Him Buster (a montage of pratfalls), and Two vintage recordings of the folk song Steamboat Bill .

Four Horsemen of the Apocalypse