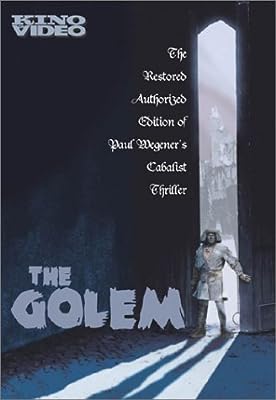 Price: $13.99
As of 2022-05-18 16:25:21 UTC (more info)
Product prices and availability are accurate as of 2022-05-18 16:25:21 UTC and are subject to change. Any price and availability information displayed on http://www.amazon.com/ at the time of purchase will apply to the purchase of this product.
Availability: Not Available - stock arriving soon
Buy Now from Amazon
Product Information (more info)
CERTAIN CONTENT THAT APPEARS ON THIS SITE COMES FROM AMAZON SERVICES LLC. THIS CONTENT IS PROVIDED 'AS IS' AND IS SUBJECT TO CHANGE OR REMOVAL AT ANY TIME.

Widely recognized as the source of the Frankenstein myth, the ancient Hebrew legend of the Golem provided actor/director Paul Wegener with the substance for one of the most adventurous films of the German silent cinema. Suffering under the tyrannical rule of Rudolf II in 16th century Prague, a Talmudic rabbi (Albert Steinruck) creates a giant warrior (Paul Wegener) to protect the safety of his people. Sculpted of clay and animated by the mysterious secrets of the Cabala, the Golem is a seemingly indestructible juggernaut, performing acts of great heroism, yet equally capable of dreadful violence. When the rabbi's assistant (Ernst Deutsch) takes control of the Golem and attempts to use him for selfish gain, the lumbering monster runs rampant, abducting the rabbi's daughter (Lyda Salmonova) and setting fire to the ghetto. With its remarkable creation sequence (a dazzling blend of religion, sorcery and special effects) and the grand scale destruction of its climax, The Golem was one of the greatest achievements of the legendary UFA Studios, and remains and undeniable landmark in the evolution of horror film.

A relic certainly, but a fascinating one, Der Golem is perhaps the screen's first great monster movie. Though it was actually the third time director-star Paul Wegener had played the eponymous creation, the earlier efforts (sadly lost) were rough drafts for this elaborate dramatization of the Jewish legend. When the Emperor decrees that the Jews of mediaeval Prague should be evicted from the ghetto, a mystical rabbi creates a clay giant and summons the demon Astaroth who breathes out in smoky letters the magic word that will animate the golem. Intended as a protector and avenger, the golem is twisted by the machinations of a lovelorn assistant and, like many a monster to come, runs riot, terrorizing guilty and innocent alike until a little girl innocently ends his rampage. Wegener's golem is an impressively solid figure, the Frankenstein monster with a slightly comical clay wig. The wonderfully grotesque Prague sets and the alchemical atmosphere remain potent. --Kim Newman