Foolish Wives / The Man You Loved to Hate 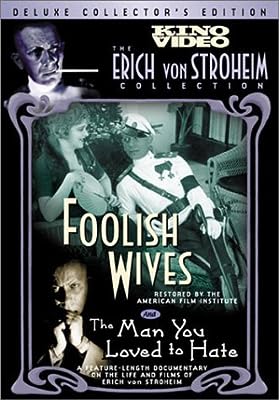 Price: $21.11
As of 2023-01-31 12:44:08 UTC (more info)
Product prices and availability are accurate as of 2023-01-31 12:44:08 UTC and are subject to change. Any price and availability information displayed on http://www.amazon.com/ at the time of purchase will apply to the purchase of this product.
Availability: Not Available - stock arriving soon
Buy Now from Amazon
Product Information (more info)
CERTAIN CONTENT THAT APPEARS ON THIS SITE COMES FROM AMAZON SERVICES LLC. THIS CONTENT IS PROVIDED 'AS IS' AND IS SUBJECT TO CHANGE OR REMOVAL AT ANY TIME.

As artistically brilliant as it is gleefully perverse, Foolish Wives is Erich von Stroheim's epic-scale account of an American diplomat's wife (Miss. Dupont) who falls under the spell of a phony Russian Count (von Stroheim). With his trademark eye for visual metaphor and gritty detail, von Stroheim infuses the aristocratic splendor of Monte Carlo (rebuilt in all its majesty on the Universal backlot) with an air of moral depravity. The result is a Grimm's fairytale romance that is no less fascinating today than it was 80 years ago. The Man You Loved To Hate blends revealing interviews, rare photographs and clips from von Stroheim's legendary and lesser-known works to create a fascinating tribute to one of American cinema's most complex artists.