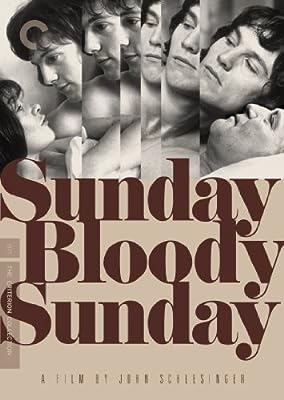 Price: $18.01
As of 2022-11-29 16:37:12 UTC (more info)
Product prices and availability are accurate as of 2022-11-29 16:37:12 UTC and are subject to change. Any price and availability information displayed on http://www.amazon.com/ at the time of purchase will apply to the purchase of this product.
Availability: Not Available - stock arriving soon
Buy Now from Amazon
Product Information (more info)
CERTAIN CONTENT THAT APPEARS ON THIS SITE COMES FROM AMAZON SERVICES LLC. THIS CONTENT IS PROVIDED 'AS IS' AND IS SUBJECT TO CHANGE OR REMOVAL AT ANY TIME.

John Schlesinger followed his Academy Award–winning Midnight Cowboy with this sophisticated and highly personal take on love and sex. Sunday Bloody Sunday depicts the romantic lives of two Londoners, a middle-aged doctor and a prickly thirtysomething divorcée—played by Oscar winners Peter Finch (Network) and Glenda Jackson (Women in Love)—who are sleeping with the same handsome young artist (Murray Head). A revelation in its day, this may be the 1970s’ most intelligent, multitextured film about the complexities of romantic relationships; it is keenly acted and sensitively directed, from a penetrating screenplay by novelist and critic Penelope Gilliatt.