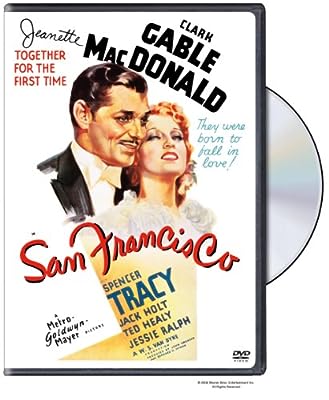 Price: $19.97
As of 2022-08-18 16:14:50 UTC (more info)
Product prices and availability are accurate as of 2022-08-18 16:14:50 UTC and are subject to change. Any price and availability information displayed on http://www.amazon.com/ at the time of purchase will apply to the purchase of this product.
Availability: Not Available - stock arriving soon
Buy Now from Amazon
Product Information (more info)
CERTAIN CONTENT THAT APPEARS ON THIS SITE COMES FROM AMAZON SERVICES LLC. THIS CONTENT IS PROVIDED 'AS IS' AND IS SUBJECT TO CHANGE OR REMOVAL AT ANY TIME.

Academy Award winners Clark Gable and Spencer Tracy star as best friendsand rivals, rogue and priest, fighting for the soul of a beautifulwoman--and for the soul of one of the world's greatest cities, SanFrancisco.1906. In the beautiful, brawling city spawned by the California GoldRush, party boss and dance hall owner Blackie Norton (Gable) refuses torelease singer Mary Blake (Jeanette MacDonald) from her contract withhim. Blackie's best friend, Father Tim Mullin (Tracy), urges him to letMary sing for the city's opera, but Blackie can't admit to anyone thathe won't let Mary go because he's in love with her. But when the 1906earthquake destroys the city, Blackie and Mary discover what is trulyimportant, and together they vow to rebuild their lives and theirbeloved city.

"San Francisco, open your Golden Gate...." If the classic city anthem isn't part of your life already, it will be after a viewing of this 1936 hit, a wonderful blend of cornpone, spectacle, and song. It's set in 1906, the year the earthquake flattened much of Baghdad by the Bay. Like the disaster movies that followed (including In Old Chicago, a Fox cash-in from a couple of years later), San Francisco slowly establishes its characters before unleashing the destruction. Clark Gable is Blackie Norton, a cocky and ruthless Barbary Coast character whose heart is--well, not softened, but at least dented by the arrival of an opera singer (Jeanette MacDonald) looking for a job. He hires her for his rowdy club, while his childhood chum, Father Tim Mullin (Spencer Tracy), disapproves. As they would subsequently demonstrate in Test Pilot and Boom Town, Gable and Tracy have great he-man rapport together (Blackie's rampant maleness is challenged only by the fact that he knows the priest could punch him out). Director W.S. Van Dyke (The Thin Man) keeps everything cracking along, except for those moments when Cultcha rears its head and MacDonald sings an aria. When the quake hits, and the fire follows, the movie uncorks some really quite awesome special effects, including the unforgettable image of a street heaving up and separating under people's feet--much superior to the disaster effects in The Last Days of Pompeii, made just a year earlier. Needless to say, this could only be MGM in its heyday, laying on the big budget, an acceptable level of naughtiness, and a dose of religious turnaround in the end. It worked then; it still does. --Robert Horton