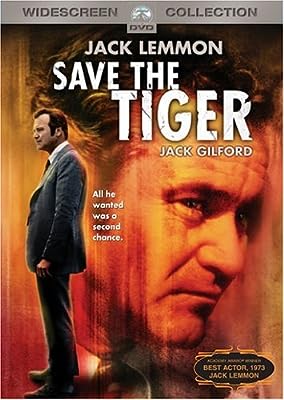 Price: $12.99
Availability: Not Available - stock arriving soon
Buy Now from Amazon
Product Information (more info)
CERTAIN CONTENT THAT APPEARS ON THIS SITE COMES FROM AMAZON SERVICES LLC. THIS CONTENT IS PROVIDED 'AS IS' AND IS SUBJECT TO CHANGE OR REMOVAL AT ANY TIME.

Jack Lemmon won an Oscar. for this dramatic performance, considered by many to be his finest. Lemmon plays Harry Stoner, a man caught in violent collision with his past and present life. He believes there is nothing significant in his life except survival, and that instinct pushes him beyond moral conduct. He'll juggle the books, supply women for clients... and even set fire to his own dress manufacturing factory. He is drawn to an America when life not only had values and heroes, it all seemed worth living and building. But Harry is frightened to break away from the emptiness of his seemingly successful life.

There are several films for which Jack Lemmon deserved to win the Oscar--The Apartment and Days of Wine and Roses among them--but it was this low-key entry from 1973 that garnered the gold (following a supporting award for Mister Roberts.) Harry Stoner is a Watergate-era man in the gray flannel suit--even if his is "Italian silk." Sure, he's got the Beverly Hills manse, complete with maid, but business is hanging by a thread. When it starts to unravel, he risks losing everything. And finances aren't his only problem. After 30 years, he's still haunted by the war and only wants to talk baseball and big bands. His wife urges him to see a therapist. Phil (Jack Gilford, a fine foil) is Harry's garment-manufacturing partner. Neither is a model of business ethics, but when Harry suggests torching a factory for insurance money, Phil is mortified. He suggests they turn to the Mob, but Harry would prefer a quicker fix. As in The Swimmer, another painful portrait of the American Dream gone bad, John G. Avildsen (who picked up his own statuette for Rocky) takes a revealing snapshot of a dying breed. Like much of Lemmon's best work, it can be hard to watch, but just as hard not to. In retrospect, Harry looks like a dry run for the even more nakedly desperate characters of Glengarry Glen Ross and Short Cuts. If you ever wondered how they got that way--Save the Tiger is your answer. --Kathleen C. Fennessy

Sid and Nancy (The Criterion Collection)