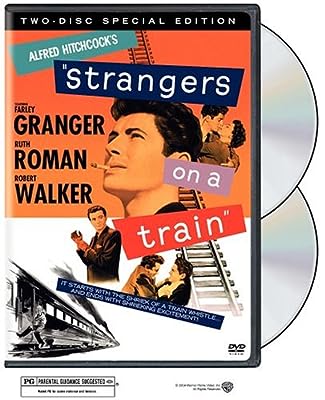 Price: $14.98
As of 2022-08-18 15:15:54 UTC (more info)
Product prices and availability are accurate as of 2022-08-18 15:15:54 UTC and are subject to change. Any price and availability information displayed on http://www.amazon.com/ at the time of purchase will apply to the purchase of this product.
Availability: Not Available - stock arriving soon
Buy Now from Amazon
Product Information (more info)
CERTAIN CONTENT THAT APPEARS ON THIS SITE COMES FROM AMAZON SERVICES LLC. THIS CONTENT IS PROVIDED 'AS IS' AND IS SUBJECT TO CHANGE OR REMOVAL AT ANY TIME.

Strange thing about this trip. So much occurs in pairs. Tennis star Guy (Farley Granger) hates his unfaithful wife. Mysterious Bruno (Robert Walker) hates his father. How perfect for a playful proposal: I'll kill yours, you kill mine. Now look at how Alfred Hitchcock reinforces the duality of human nature. The more you watch, the more you'll see. "Isn't it a fascinating design?" the Master of Suspense often asked. Actually, it's doubly fascinating. Hitchcock left behind two versions of Strangers on a Train. The original version (Disc 1) is an all-time thriller classic. A recently found longer prerelease British print (Disc 2) offers "a startling amplification of Bruno's flamboyance, his homoerotic attraction to Guy and his psychotic personality," according to Bill Desowitz of Film Comment. The laying bare of Bruno's hidden nature, along with the great set pieces (head-turning tennis match, disintegrating carousel) and suspense as only Hitchcock can deliver, makes for a first-class trip. DISC 1: • Final Release Version (101 Min.) with Commentary by Director Peter Bogdanovich, Psycho Screenwriter Joseph Stefano, Patricia Highsmith Biographer Andrew Wilson and Several Hitchcock Colleagues, Aficionados and Family Members, Plus the Suspense Master Himself in an Interview Excerpt • Theatrical Trailer • Languages: English & Français • Subtitles: English, Français & Español DISC 2: • Preview Version (103 Min.) Uncovered in 1991 and Theatrically Issued in 1996 • New Making-of Documentary Strangers on a Train: A Hitchcock Classic, with Farley Granger, Pat Hitchcock O’Connell, Film Historian Richard Schickel and Other Hitchcock Family Members, Colleagues and Aficionados Recalling the Making of a Suspense Landmark • 3 Intriguing Featurettes: The Hitchcocks on Hitch, Strangers on a Train: The Victim’s P.O.V. and Strangers on a Train: An Appreciation by M. Night Shyamalan • Alfred Hitchcock’s Historical Meeting Vintage Newsreel • Subtitles: English, Français & Español

From its cleverly choreographed opening sequence to its heart-stopping climax on a rampant carousel, this 1951 Hitchcock classic readily earns its reputation as one of the director's finest examples of timeless cinematic suspense. It's not just a ripping-good thriller but a film student's delight and a perversely enjoyable battle of wits between tennis pro Guy (Farley Granger) and his mysterious, sycophantic admirer, Bruno (Robert Walker), who proposes a "criss-cross" scheme of traded murders. Bruno agrees to kill Guy's unfaithful wife, in return for which Guy will (or so it seems) kill Bruno's spiteful father. With an emphasis on narrative and visual strategy, Hitchcock controls the escalating tension with a master's flair for cinematic design, and the plot (coscripted by Raymond Chandler) is so tightly constructed that you'll be white-knuckled even after multiple viewings. Strangers on a Train remains one of Hitchcock's crowning achievements and a suspenseful classic that never loses its capacity to thrill and delight. --Jeff Shannon