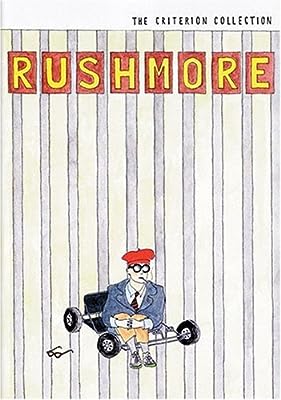 Price: $15.99
Availability: Not Available - stock arriving soon
Buy Now from Amazon
Product Information (more info)
CERTAIN CONTENT THAT APPEARS ON THIS SITE COMES FROM AMAZON SERVICES LLC. THIS CONTENT IS PROVIDED 'AS IS' AND IS SUBJECT TO CHANGE OR REMOVAL AT ANY TIME.

Wes Anderson's dazzling sophomore effort is equal parts coming-of-age story, French New Wave homage, and screwball comedy. Tenth grader Max Fischer (Jason Schwartzman) is Rushmore Academy's most extracurricular student -- and its least scholarly. He faces expulsion and enters into an unlikely friendship with both a lovely first-grade teacher (Olivia Williams) and a melancholy self-made millionaire (Bill Murray, in an award-winning performance). Set to a soundtrack of classic British Invasion tunes, RUSHMORE defies categorization even as it captures the pain and exuberance of adolescence with emotional depth, and cinematic panache. Criterion is proud to present one of 1998's most acclaimed films in a Director Approved special edition.

Rebel Without a Cause (Two-Disc Special ...