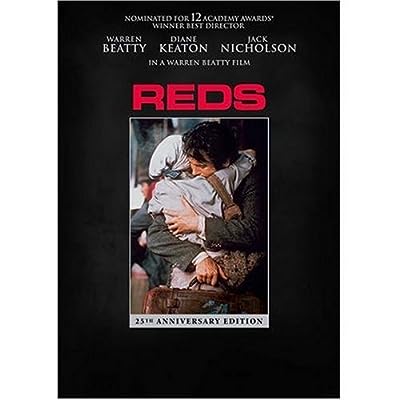 Price: $14.99
As of 2022-10-04 17:19:41 UTC (more info)
Product prices and availability are accurate as of 2022-10-04 17:19:41 UTC and are subject to change. Any price and availability information displayed on http://www.amazon.com/ at the time of purchase will apply to the purchase of this product.
Availability: Not Available - stock arriving soon
Buy Now from Amazon
Product Information (more info)
CERTAIN CONTENT THAT APPEARS ON THIS SITE COMES FROM AMAZON SERVICES LLC. THIS CONTENT IS PROVIDED 'AS IS' AND IS SUBJECT TO CHANGE OR REMOVAL AT ANY TIME.

In some ways, Warren Beatty's 195-minute film about the radical movement at the beginning of the 20th century is the last Hollywood studio epic. A peerless reporter, John Reed, mixes with the intellectuals of the time who see socialism as the answer to end what would become the First World War. As with epics, we go on a journey--from Portland to New York to Europe and finally Russia--just in time to witness the revolution that would make Reed famous upon publishing "Ten Days That Shook the World." But Reed had more ambition, and Beatty's ambition is splendidly captured on the screen, matched by a tremendous cast and stunning visuals (shot by Oscar-winner Vittorio Storaro). Reds doesn't have the action or vistas as a David Lean epic, but travels on the road less taken--here, seeing the birth of communism. Beatty and Trevor Griffiths lace their talky script of ideas with plenty of humor and fashion a poignant love story. Reed's infatuation with the rebel without a cause, Louise Bryant (Diane Keaton), turns into a love triangle with playwright Eugene O'Neill (Jack Nicholson at his most sublime). As Brooks becomes more complex and stalwart, the love story becomes something more. Keaton is perfect in following the arc of Brooks, just another spot-on casting decision by Beatty. Also impressive is Oscar winner Maureen Stapleton as feisty activist Emma Goldman and author Jerzy Kolinsky (Being There) as a Russian diplomat. The boldest stroke is hearing from real "witnesses" talking about the times. They are funny, poetic, deft, provide musical accompaniment and, most importantly, expertly set up scenes. The uninitiated will learn about this time in remarkable fashion; the cineaste can marvel in the ground Beatty covers, never better then a montage ending first half as Reed and Brooks are literally swept up in the revolution.

Beatty states at the top of the DVD extras he's not a big fan of talking about a movie (and did no publicity for the film upon its release in 1981). So there is no commentary track, just an expertly produced 90-minute retrospective with interviews from most of the major players, minus Keaton. We find out why Beatty's best performances are the ones he doesn't direct, while Nicholson provides the reason why Beatty had to star. Beatty talks about the process to interview the witnesses, and when we see bits of unused footage, it whets the appetite for more. Certainly, an hour of witness outtakes would have been something special, and would allow Beatty not to speak about his masterpiece. --Doug Thomas