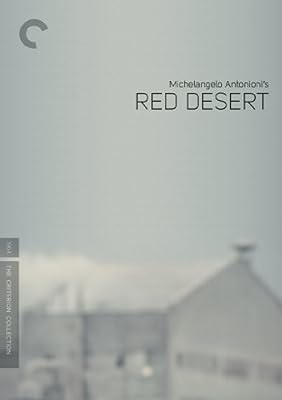 Price: $24.02
As of 2023-02-05 06:58:07 UTC (more info)
Product prices and availability are accurate as of 2023-02-05 06:58:07 UTC and are subject to change. Any price and availability information displayed on http://www.amazon.com/ at the time of purchase will apply to the purchase of this product.
Availability: Not Available - stock arriving soon
Buy Now from Amazon
Product Information (more info)
CERTAIN CONTENT THAT APPEARS ON THIS SITE COMES FROM AMAZON SERVICES LLC. THIS CONTENT IS PROVIDED 'AS IS' AND IS SUBJECT TO CHANGE OR REMOVAL AT ANY TIME.

A neurotic woman seeks an outlet with her husband's colleague. Directed by Michelangelo Antonioni.

As Michelangelo Antonioni's first color film, Red Desert continues the director's Italian neorealist examinations of human anxieties induced by industrialization. Made in 1964, the film chronicles a neurotic woman, Giuliana (Monica Vitti), who suffers from loneliness and estrangement from her factory worker husband, Ugo (Carlo Chionetti). While in the opening scenes Giuliana totes around her son, Valerio (Valerio Bartoleschi), a majority of the film focuses not on her role as mother but on her flirtation with Ugo's coworker, Corrado Zeller (Richard Harris). Throughout, human conflict unfolds in front of massive industrial landscapes that depict machinery and pollution to excessive degrees. Giuliana, established as somewhat of an unreliable narrator after she admits existential angst caused by a car accident that was intentional on her part, comes to look like the most sympathetic character by the end, compared to the others' cold distance. At the root of her illness is a woman who "wanted it all," as she says, when really all she wants is some purpose and connection. Shots capturing oily pools, electrical wires blocking the sky, and blaringly loud factory gear reinforce Giuliana's disconnect. Later in the film, one sees the familial repercussions of her inability to get a grasp on love, as little Valerio reenters the story. Even the title, Red Desert, sets up this film as a study in how color can manipulate the viewer's emotions. Each shot, each scene, is so carefully composed that it has an almost eerie staged feel. A wonderfully funny, sexy sequence mid-film, in which Ugo, Giuliana, and Corrado visit a shack populated by bored, sex-crazed girls, lightens what is a rather melancholic portrayal of brewing madness.

Criterion Collection's treatment of Red Desert is excellent, as well. Two short black-and-white Antonioni documentaries, "N.U." and "Gente del Po," illustrate this director's earlier attempts at capturing on film the modern dilemma facing humans at the hands of burgeoning technology. Two archival interviews, one with Antonioni and one with Vitti, are full of rich anecdotal background information about the inspiration for Red Desert and L'Avventura. Even the film's dailies are included in the supplements so one can see how Antonioni composed and pulled off his amazing camera work. --Trinie Dalton