Out of the Past 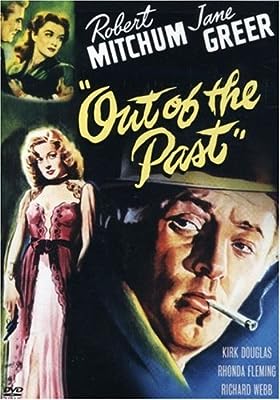 Price: $19.98
As of 2022-12-09 16:50:52 UTC (more info)
Product prices and availability are accurate as of 2022-12-09 16:50:52 UTC and are subject to change. Any price and availability information displayed on http://www.amazon.com/ at the time of purchase will apply to the purchase of this product.
Availability: Not Available - stock arriving soon
Buy Now from Amazon
Product Information (more info)
CERTAIN CONTENT THAT APPEARS ON THIS SITE COMES FROM AMAZON SERVICES LLC. THIS CONTENT IS PROVIDED 'AS IS' AND IS SUBJECT TO CHANGE OR REMOVAL AT ANY TIME.

"Build my gallows high, baby"--just one of the quintessentially noir sentiments expressed by Robert Mitchum in this classic of the genre. Mitchum, in absolute prime, sleepy-eyed form, relates a complicated flashback about getting hired by gangster Kirk Douglas to find femme fatale Jane Greer. The chain of film noir elements--love, money, lies--drags Mitchum into the lower depths. Director Jacques Tourneur gets the edgy negotiations between men and women as exactly right as he gets the inky shadows of the noir landscape (even the sunlit exteriors are fraught with doubt). This is Mitchum in excelsis, with his usual laid-back cool laced with great dialogue and tragic foreshadowing. As for his co-star, James Agee immortally opined that Jane Greer "can best be described, in an ancient idiom, as a hot number." Remade in 1984, unhappily, as Against All Odds (with Greer in a supporting role). --Robert Horton