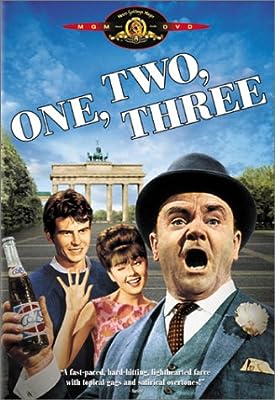 Price: $14.98
As of 2023-01-31 23:25:27 UTC (more info)
Product prices and availability are accurate as of 2023-01-31 23:25:27 UTC and are subject to change. Any price and availability information displayed on http://www.amazon.com/ at the time of purchase will apply to the purchase of this product.
Availability: Not Available - stock arriving soon
Buy Now from Amazon
Product Information (more info)
CERTAIN CONTENT THAT APPEARS ON THIS SITE COMES FROM AMAZON SERVICES LLC. THIS CONTENT IS PROVIDED 'AS IS' AND IS SUBJECT TO CHANGE OR REMOVAL AT ANY TIME.

James Cagney gives one of the richest, funniest, most breathlessly paced performances of his career (The New York Times) in this Billy Wilder comedy that defrosts the Cold War with gales of laughter! C. R. MacNamara (Cagney), a top-ranking executive stationed in West Berlin, is charged with the care of his boss visiting daughter. But when he learns that she's gone and married a fierce young communistand that his boss will be arriving in town in 24 hoursMac must transform the unwilling beatnik into a suitable son-in-law or risk losing his chance for advancement! Before you cansay one, two, three, his plans have spun out of control and into an international incident that could infuriate the Russians, the Germans and, worst of all, his own suspicious wife (Arlene Francis)!