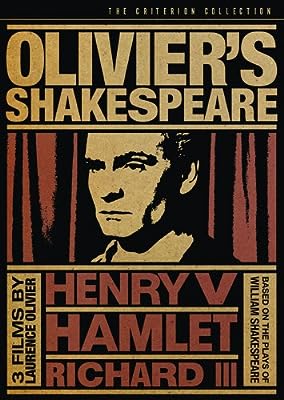 Price: $79.95
As of 2022-10-03 23:48:20 UTC (more info)
Product prices and availability are accurate as of 2022-10-03 23:48:20 UTC and are subject to change. Any price and availability information displayed on http://www.amazon.com/ at the time of purchase will apply to the purchase of this product.
Availability: Not Available - stock arriving soon
Buy Now from Amazon
Product Information (more info)
CERTAIN CONTENT THAT APPEARS ON THIS SITE COMES FROM AMAZON SERVICES LLC. THIS CONTENT IS PROVIDED 'AS IS' AND IS SUBJECT TO CHANGE OR REMOVAL AT ANY TIME.

Dubbed the greatest actor of the twentieth century, Sir Laurence Olivier, the classically trained and majestically handsome English theater veteran, first transplanted his passion for Shakespeare to the big screen in the 1940s, and in so doing, allowed Elizabethan verse to break free of its stage-bound origins. Olivier directed only five films in his sixty-year career, yet his three Shakespeare adaptations (Henry V, Hamlet, Richard III), presented here together on DVD for the first time, are still widely considered the definitive film adaptations. Faithful to the playwright’s words yet open to the unique possibilities of the cinema, these works transcend both screen and stage with timeless passion. Criterion is proud to present this unprecedented filmmaking legacy.