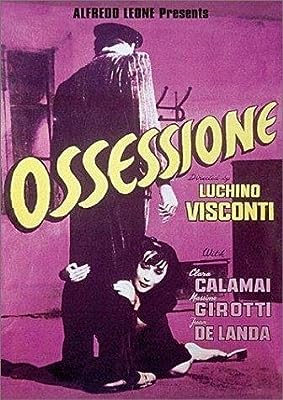 Price: $24.99
As of 2022-12-09 09:25:54 UTC (more info)
Product prices and availability are accurate as of 2022-12-09 09:25:54 UTC and are subject to change. Any price and availability information displayed on http://www.amazon.com/ at the time of purchase will apply to the purchase of this product.
Availability: Not Available - stock arriving soon
Buy Now from Amazon
Product Information (more info)
CERTAIN CONTENT THAT APPEARS ON THIS SITE COMES FROM AMAZON SERVICES LLC. THIS CONTENT IS PROVIDED 'AS IS' AND IS SUBJECT TO CHANGE OR REMOVAL AT ANY TIME.

Passion turns deadly in this controversial neo-realist classic from acclaimed director Luchino Visconti (Death in Venice), adapted from James M. Cain's "The Postman Always Rings Twice." Beautiful hotel owner Giovanna ("Deep Red's" Clara Calamai) is hopelessly drawn to Gino ("Last Tango in Paris'" Massimo Girotti), a handsome drifter. They decide to kill off her spouse and collect his hefty insurance premium, but soon the lovers are trapped in a spiral of deception, jealousy, and fate. Banned and censored for years, "Ossessione" profoundly affected generations of audiences after causing a stormy religious and political scandal in Italy, and is now available in its original, uncensored director's cut.

Landmark world cinema director Luchino Visconti's first film, and a breakthrough in Italian neo-realism, was banned by the Fascists. With control and meticulous detail, the story follows two lovers who dispose of an unwanted husband only to find their troubles just beginning.