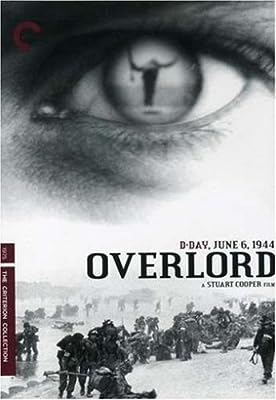 A young British soldier and his mind are followed from his induction to his D-Day fate.

To borrow a phrase from Film Comment editor-at-large Kent Jones, "unjustly forgotten and now happily resurrected" is the best way to describe Criterion's superb DVD release of Stuart Cooper's Overlord. Relatively unseen since its European theatrical release in 1975, this moody, well-crafted meditation on one soldier's preparation for battle employs a remarkably seamless combination of fictional narrative and amazing World War II footage from the archives of England's Imperial War Museum. While this "reel + real" technique is relatively common, director Stuart Cooper (an American filmmaker working in England) applied meticulous archival research to ensure that the documentary footage was logically and authentically integrated with his fictional narrative (cowritten with Christopher Hudson) to lend convincing verisimilitude to his simple, straightforward story of a young British soldier's anxious days prior to joining the front line in the D-Day Invasion of Nazi-occupied France (a.k.a. "Operation Overlord"--June 6, 1944). Haunted by a premonition of his own death, Tom (Brian Stirner) goes about his pre-battle business as any soldier would (including a touchingly sweet romance with an equally shy British girl, played by Julie Neesam), and as Overlord progresses, we see how the individual soldier is gradually absorbed into the massive machinery of warfare. Brilliantly filmed in black and white by Stanley Kubrick's frequent cinematographer John Alcott, Overlord succeeds as a thought-provoking study of war from intimate to epic scales, in addition to being an impressive technical achievement that's stylistically connected to the experimental narratives of the 1970s, yet still firmly rooted in the nobility of British war films from the 1940s. --Jeff Shannon

On the DVD
As always, the Criterion Collection did extensive research to provide Overlord with a wealth of informative supplements. Director Stuart Cooper and actor Brian Stirner share the DVD's feature-length commentary, and Overlord's historical context is thoroughly explored, beginning with "Mining the Archive," in which the Imperial War Museum archivists provide background history on the archival footage that director Stuart Cooper so carefully integrated into his narrative. "Capa Influences Cooper" is a photo essay in which Cooper explores the influence of legendary war photographer Rober Capa on the visual and emotional content of Overlord, and this emphasis is further supported by "Cameramen at War," a newsreel tribute to wartime photographers and newsreel cameramen, featuring some of the Imperial War Museum's most spectacular footage from World War II. "Germany Calling" is an amusing example of archival propaganda (produced in 1941 by the British Ministry of Information and briefly excerpted in Overlord) which ridicules Hitler's Nazi regime by synchronizing Nazi rally footage so a silly British melody. "A Test of Violence" is Stuart Cooper's 1969 short tribute to the bleak, war-themed paintings of Spanish artist Juan Genovés; it was this film that led Cooper to create Overlord. Also included is Stirner's dramatic reading of journals by two Scottish D-Day soldiers whose experiences parallel those of Stirner's character in Overlord; the film's original theatrical trailer; and a 30-page booklet with an Overlord essay by Kent Jones, a short history of the Imperial War Museum, and excerpts from the Overlord novelization by Cooper and cowriter Christopher Hudson. --Jeff Shannon